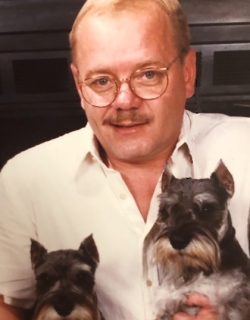 Rodney G. Wortman, 69, of Los Angeles, CA, died Wednesday, March 11 at his home in Los Angeles.  Memorial Mass will be 9:00am on Saturday, July 25 at St. Mary’s Catholic Church in West Point with Rev. Steve Emanuel as celebrant.  Burial will be at St. Michael’s Cemetery.  Arrangements by Stokely Funeral Home.

Rodney Gene Wortman was born on December 3, 1950 to Ray and Vernelle Wortman in West Point.  He graduated from West Point Public High School in 1969 and continued his education at the University of Nebraska-Lincoln.  After graduation, Rodney made his way to the sunshine of California where he worked in the airline industry for several years.   Rodney found his calling in 1989 when he began working as a Los Angeles County Health Inspector.  From restaurants to apartment complexes, he cruised through establishments making sure everything was up to standard.

Rodney enjoyed the finer things in life which showed his expensive taste.  His personality and quick, dry wit will be deeply missed.

He is preceded in death by his parents Ray and Vernelle; brother, Roland “Putz”; and beloved dogs, Weiner and Schnitzel.