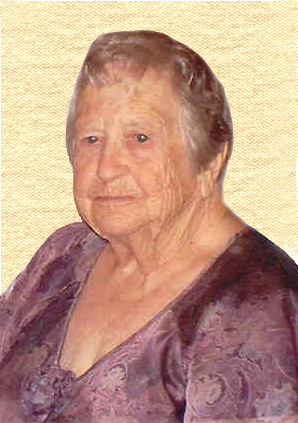 Wilma E. Loftus, 98, of Howells died Sunday July 21, 2013 at Golden Living Center in Clarkson. Memorial Mass will be 10:00am Friday August 9 at Saints Peter and Paul Catholic Church in Howells with Reverend Leo Rigatuso as celebrant. Burial will be at Saints Peter and Paul Catholic Cemetery. Memorials may be made to Clarkson Fire and Rescue or Saints Peter and Paul School Improvement Project. Wilma was born October 9, 1914 to C. J. and Stella Barrett in a sod house built by her father in Hayes County, NE. Wilma grew up on a ranch 12 miles north of North Platte and graduated from North Platte High School in 1932. On May 22, 1937, Wilma married J. Michael (Mike) Loftus. Wilma taught in rural schools in Lincoln County, riding 16 miles on horseback each way to teach in one of the schools. When her husband was hired by the railroad as a relief agent, the couple moved every seven days from station to station, and they purchased a trailer in which to live while moving weekly to locations in Utah, Wyoming, and Nebraska. When their daughter Billie Dee started school, they bid in a permanent position at Cortland, NE, where they lived for 16 years before moving to David City. Wilma taught school while the family lived in Cortland and was a secretary while they lived in David City. After retirement, Wilma and Mike again purchased a trailer, and then an RV, so they could travel. During her lifetime, Wilma lived in Nebraska, Utah, Wyoming, Colorado, California, Texas, Missouri, New Mexico, and Alaska. In her seventies, Wilma learned to use a computer so she could write a book about her life and another about her husband’s life. When the couple could no longer travel, they made their home with their daughter Gin in San Francisco, CA and Truth or Consequences, NM. Following her husband’s death, Wilma lived with Gin in Anchorage, AK, and in May 2011 she moved to Nebraska to live with her daughter Billie Dee. In November 2012, Wilma moved to Golden Living Center in Clarkson. Survivors include daughters Billie Dee Baumert of Howells and Gin Crawford of Anchorage, AK; 10 grandchildren; 28 great-grandchildren; 14 great-great-grandchildren; and brothers Robert Barrett and Hadley (Lee Ann) Barrett. Wilma was preceded in death by her husband Mike in 1999; parents C. J. and Stella Barrett; sisters Milly Ulmer and Maureen Van Buren; brothers Warren (Mike) Barrett, Jay Barrett, and two infant brothers. Stokely Funeral Home of West Point in charge of arrangements.