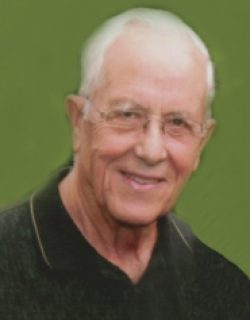 Walter Steffensmeier, 85, of Dodge, died Saturday, April 11, 2015 at the Josie Harper Hospice House in Omaham.ass of Christian Burial will be Tuesday, April 14 at 10:00am at St. Wenceslaus Catholic Church in Dodge with Rev. An Duy Phan as celebrant. Burial with military honors will be at St. Wenceslaus Cemetery. Visitation will be Monday from 3:00pm to 7:00pm with wake service at 7:00pm all at church. Memorials may be made to St. Wenceslaus Catholic Church or the Dodge Veteran’s Memorial. Walter was born October 7, 1929 on the family farm to Bernard and Julia (Renner) Steffensmeier, the 8th of 12 children. After graduating from Sacred Heart Academy at Olean, Walter served in the US Army from October, 1951 until October, 1953. On June 17, 1958, he married Mary Ann Rolf. The couple lived in Dodge and established Steffensmeier Grinding Service, and in 1961 he joined the staff of Cooperative Supply . Walter was a member of St. Wenceslaus Catholic Church and Holy Name Society. He was very involved in the sport of baseball. He managed the Town, Midget, and Legion teams in addition to being a member of the Town and Legion committees and president of the Dodge County Baseball association. Walter was a member, adjutant, and commander of the Dodge American Legion Post 122 and a volunteer fireman for 27 years. He also enjoyed playing golf and bowling. Survivors include his children Gary (Julie) of Kearney, Sue (Don) Mandel of Omaha, Dean (Lisa) of Lincoln and Don (Joni) of Omaha; sisters Theresa Dinslage of Dodge and Agnes (William) Hunke of West Point; brother Monsignor Ralph Steffensmeier of Cedar Rapids; sisters in law Ann Steffensmeier of Howells and Henrietta Steffensmeier of West Point; grandchildren Tyler, Kyle, Andrew, Matthew, Kimberly and Caleb Steffensmeier, Nick, Elizabeth and Anna Mandel, and Tifany (Craig) Stork. He was preceded in death by his wife Mary Ann on December 12, 2014 parents; brothers Aloysius, Nicholas, Herman, George, Vincent, Wilfred and Norbert and sister Caroline Kempf. Visit Walter’s living obituary at www.forevermissed.com/walter-steffensmeier. Stokely Funeral Home in charge of arrangements.