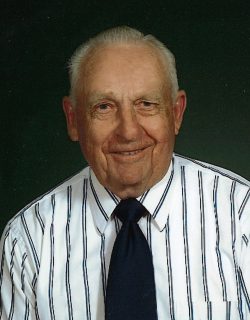 Theodore “Ted” Buchholz, 94, of West Point, died Saturday, October 31, 2020 at St. Joseph’s Hillside Villa in West Point.  Memorial service with Military Honors will be at 1:00pm on Saturday, November 7 at Grace Lutheran Church in West Point with Reverend Priscilla Hukki as officiant.  Masks will be required and seating will be socially distanced by household.  The service will be live-streamed on the Stokely Funeral Home Facebook page at facebook.com/stokelyfuneralhome.  Memorials may be made to Grace Lutheran Church or the Sunshine Center.  Arrangements by Stokely Funeral Home.

Theodore Herman Buchholz was born on January 18, 1926 to Theodore and Matilda (Prawitz) Buchholz on the family farm near Bancroft.  He was baptized at Grace Lutheran Church in West Point and was a lifelong member there.  Ted enlisted in the United States Navy and was stationed at Iroquois Point, HI during World War II.  After his military service, he played baseball for West Point on the semi-pro team in the Pioneer Night League.  On November 4, 1951 Ted married Lorraine Kleeman and the couple had three children.  Ted worked as a carpenter and rural mail carrier.  He retired from the postal service but continued to do wood working projects.

Ted loved working in his garden.  He could grow any vegetable or flower with considerable success.  He also enjoyed fishing and hunting and was an excellent bowler.  He was involved with the Cuming County Historical Society and painstakingly cut the depot into three pieces so it could be moved to its current location at Neligh Park.  Ted was a dedicated blood donor and gave a total of 30 gallons.

Ted is survived by his daughter, Susan (Jeff) Meyer of Des Moines, IA; sons, Terry and Roger (Sally) both of Lincoln; grandchildren, Shannon Dmoski of Las Vegas, NV, Zak Meyer of Omaha, and Kevin Meyer of Aurora, CO; 4 great-grandchildren; and numerous nieces and nephews.  Ted is preceded in death by his wife, Lorraine; parents; and one brother and three sisters.