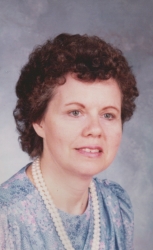 Sandra Leffler, 75, died Thursday, March 3, 2016 at Shalimar Gardens in Fremont. Funeral Mass will be at 10:30am on Monday, March 7 at Holy Cross Catholic Church in Beemer with Reverend Steve Emanuel as celebrant. Lunch will follow in the church basement. Burial will be at 1:00pm Monday at St. Michael’s Cemetery in West Point. Visitation will be from 12:00pm to 6:00pm on Sunday with a Vigil Service at 4:00pm at Stokely Funeral Home. Memorials may be made to the Alzheimer’s Association or American Cancer Society Relay For Life. Sandra Jean Leffler was born on September 7, 1940 to James and Iola (Osborne) Waugh in Kearney. Sandra grew up in Kearney where she graduated from high school in 1958. On June 10, 1959, Sandra married Marvin Leffler at St. James Catholic Church in Kearney. After the wedding, the couple settled in Fremont where Sandra worked various jobs at K-mart, Valley View Country Club, and Fremont National Bank. Later in life, she pursued her passion of antiques when the couple opened’Grandma’s China Closet’ in Fremont. The couple ran the store for 15 years before retiring. Sandra was a member of St. Patrick’s Catholic Church and relished spending time with her grandchildren. She is survived by her husband, Marvin, of Fremont; children Susan (Melvin) Niewohner of Beemer, Dan (Deanne) Leffler and Gary Leffler both of Kearney; grandchildren Ashley (Wyatt) Jindra, Justin, Megan, Adam, Shelby, and Morgan Niewohner, Ashley Arehart, Lindsay Wasser, and Tyler, Cory, Victoria, and Kirstyn Leffler; and seven great-grandchildren. Sandra is preceded in death by her parents, brothers Dick and Raleigh Waugh, and infant granddaughter Kelsey Niewohner.