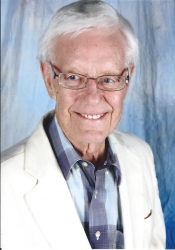 Richard (Dick) Lindberg, 83, of West Point passed away Wednesday, Sept. 10, 2014 at St. Francis Memorial Hospital. Dick was born February 21, 1931 in Holyoke, CO to E. W. and Marjory Lindberg. He graduated from Phillips County High School in 1949. He and Gwen Einspahr were married Sept. 5, 1952 in Imperial, NE. They had four sons, Jeff, Greg, Mike and Joe. They lived in Littlefield, TX where Dick was a printer. In May 1954 they moved to Ord where he was employed by the Ord Quiz. They were publishers of the Sargent (NE) Leader from 1956 to 1969. After working at the Albion News for four months they moved to West Point where they purchased the West Point Republican. In 1973 they combined it with the Cuming County Democrat, which became the West Point News. They also owned newspapers in Oakland, Lyons, Hooper and Scribner. They retired in 1992. Dick was active in newspapering, serving as the president of the Central District Press Association, the Northeast Nebraska Press Association, the Nebraska Press Association and the Interstate Press Association. He was named Master Editor/Publisher by NPA in 2004, and to the Nebraska Journalists Hall of Fame in 2012. He and his wife were honored by the Nebraska Sigma Delta Chi as Journalists of the Year in 1987 and by the West Point Chamber for Community Service in 1998. Dick was mayor and Chamber president in Sargent. He served on the school, library foundation and St Joseph foundation boards in West Point, also the Midlands foundation board in Fremont. After retirement he ran the local food bank, planted flowers at St. Joe’s, tutored Hispanic students and was on the Headstart and Golden Rod Hills boards. He was preceded in death by his parents, his brother Don and his youngest son Joe. Survivors include his wife, sons Jeff (Sandy) of Ft Collins, CO, Greg (Teri) of Omaha, and Mike (Jody) of Lincoln, and grandchildren Casey Lindberg, Kelsey Wise, Jake Wise, and Charlie Cronkright. VISITATION at Stokely Funeral Home, West Point, is Friday, Sept. 12, from 9-7, with family present from 5-7 pm. A memorial service is Saturday, Sept. 13, 11 am. at St. Paul Lutheran Church, West Point. Private burial of the cremains is at Mt. Hope Cemetery, West Point. Stokely Funeral Home is in charge of arrangements. Memorials are suggested to the West Point Food Pantry and to St. Paul Lutheran Church. Visit Dick’s living obituary at www.forevermissed.com/richard-lindberg