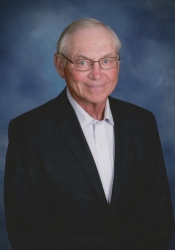 Norman’Norm’ Emanuel, 73, of West Point, died Friday, August 18, 2017 at Methodist Hospital in Omaha after a brief illness. Funeral Mass will be 10:30am Tuesday, August 22 at St. Mary’s Catholic Church with Fr. Steve Emanuel as celebrant. Burial with military honors will be at St. Michael’s Cemetery with lunch following at the Nielsen Center. Visitation will be Monday from 9:00am to 4:00pm at Stokely Funeral Home and will continue from 5:00pm to 7:00pm with a Knights of Columbus rosary at 7:00pm at church. Memorials may be made to GACC endowments or St. Mary’s Catholic Church. Stokely Funeral Home isin charge of arrangements. Norman Henry Emanuel was born on January 13, 1944 to Herman and Olivia (Knobbe) Emanuel in West Point. After graduating from Guardian Angels in 1962, he joined the U. S. Army where he was stationed in Korea. On August 7, 1971, Norm married Norma Herman at St. Mary’s Catholic Church. He worked with his father until 1978 when Norm founded Norm Emanuel Builder and focused on new home construction. In 1986, the couple purchased the West Point Home Center. Norm was a member of St. Mary’s Catholic Church, Knights of Columbus, and American Legion. He was active in both the community and St. Mary’s parish where he served on the parish council and donated his time and his talents. Norm enjoyed golfing, snow skiing, entertaining friends, and spending time with his grandkids. His easy smile and clever wit was contagious and will be missed by all. Survivors include his wife, Norma, of West Point; children, Kristin (Kelly) Daberkow of West Point, Owen (Christine) of Parker, CO, and Renee Sobotka of Lincoln; grandchildren, Audrey and Nickolas Daberkow, Matilda and Leo Emanuel, and Morgan and Joseph Sobotka; sisters, Beverly (Dennis) Brown of Carter Lake, IA and Sharon (Richard) Ingersoll of Dexter, MI; and brothers, Kenneth of West Point and Patrick (Deb) of Lone Tree, CO. Norm is preceded in death by his parents.