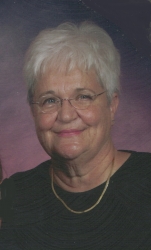 Mary Lou departed this world at age 76 on Monday, May 25, 2015, with family by her side and in spirit at Clarkson Hospital in Omaha, NE. Visitation in West Point, NE on Wednesday, June 3 from 9:00 am to 8:00 pm with family present from 6:00 pm to 8:00 pm at Stokely Funeral Home. Funeral service held on Thursday, June 4 at 10:30 am at Grace Lutheran Church with Rev. Christian Meier officiating. Burial will be at Mount Hope Cemetery. Memorials may be made to Grace Lutheran Church. Mary Lou Kindschuh entered this world on Thursday, September 1, 1938. Her parents were Richard and Irma (Mortenson) Priebnow. She was the second of four siblings and, together with their parents, they lived on a farm seven miles southeast of West Point. Mary Lou, also known as ; tootie;, ; poopsie;, ; lou; and ; putt Putt;, had a smile that could light up a room. Her love for life as well as her laughter was contagious! She attended country school and then, in 8th grade, entered West Point High. Little did she know that her beauty as well as the poodle skirt she had on caught the eye of her true love, Jim. She graduated from West Point High in 1955 at the young age of 16 and attended a business school in Omaha. She married that boy, Jim, on July 2, 1957. Mary Lou worked in the office at Iowa Beef Processors and then for 30 years at Stigge Machine & Supply. She retired in 2004. Some of the things she enjoyed were bridge, Nebraska football games, coffee, golfing, knitting, shopping, cruises and holidays. Of course her husband, children, grandchildren and great grandchildren are at the top of that list. She was a life-long member of Grace Lutheran Church, also serving on the Council, Society of Service, Sunshine Kids, serving communion to shut-ins and a member of the Jaycee’s. Those meeting her in heaven are her parents and her in-laws John and Dorothy Kindschuh; and sister-in-law, Janice Kindschuh. Missing her on earth are: husband of 57 years, Jim; daughter, Deb (Ray) Collins; son, Scott Kindschuh; son, Jeff (Chris) Kindschuh. Grandchildren: Chelsea (Scott) Anson; Whitney (Doug) Chvatal; Taylor and Tanner Collins; Sarah, Molly and Emma Kindschuh. Great Grandchildren: Levi Chvatal and Taylor Anson. Brothers: Sonny Priebnow; Alan (Joan) Priebnow; Sister, Linda Priebnow. In-Laws: Butch Kindschuh; Jack (Jeanette) Kindschuh and Mike (Cheryl) Kindschuh. As well as uncles, aunts, cousins, nieces, nephews and many friends. Visit Mary Lou’s living obituary at www.forevermissed.com/mary-lou-kindschuh/