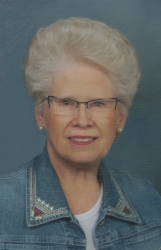 Marlyn Hunke, 83, of Ankeny, IA, formerly of West Point, passed away peacefully Thursday, May 26, 2016 at Sunny View Care Center in Ankeny. Funeral Mass will be Tuesday, May 31 at 10:30am at St. Mary’s Catholic Church. Burial will be at St. Michael’s Cemetery with lunch following at the GACC Cafeteria. Visitation will be Monday from 12:00pm to 8:00pm with Guild Rosary at 1:30pm and Vigil Service at 7:00pm all at Stokely Funeral Home. Marlyn Seeman Hunke was born June 24, 1932 in West Point to Albert and Gertrude (Glaubius) Seeman. Marlyn lived on a farm north of West Point until the family moved to West Point. Marlyn graduated in 1950 from Guardian Angels High School. She attended Briar Cliff College and Creighton University. Marlyn married Gerald Hunke on January 8, 1955 at St. Mary’s. Gerald and Marlyn had one daughter, Jody. Following college, Marlyn was the bookkeeper for her parents companies – Seeman Truck Line and the Seeman Mercury Auto Dealership. Marlyn then worked for the Gas Company for nearly 40 years, retiring from Peoples Natural Gas Co. in 1995. Marlyn was an active member of the West Point community all of her life. Along with her husband Gerald, she supported many organizations in West Point, including St. Mary’s Church, GA-CC Schools, St. Francis Memorial Hospital Auxiliary, and St. Joseph’s Retirement Community. Marlyn was a member of the St. Mary’s Guild and St. Francis Memorial Hospital Auxiliary, serving as president from 1997-99. As a couple, Marlyn and Gerald promoted West Point for the great community that it is and treasured their many relatives and friends in the aream.arlyn enjoyed participating in activities in West Point, her bridge clubs, frequent reunions with her friends from the Class of’50, celebrating with her group of June birthday friends, baking and sharing treats with friends, volunteering and helping with fundraisers for many community organizations, having pug dogs, and most importantly, having her family come home to visit. Marlyn and Gerald lived in West Point until June of 2013, when they moved to Ankeny, IA, to be near their daughter, Jody, and son-in-law, Dave. Marlyn is survived by her husband Gerald, daughter Jody (Dave) Smith of Ankeny, IA, grandson, Nathan (Meredith) Smith, of St. Charles, MO. and great-grandchildren, Kiley and Brody, sisters-in-law, Beatrice Seeman of West Point, Ruth Picha of Castro Valley, CA, Grace Counts of Colorado Springs, CO, and brother-in-law Bill (Agnes) Hunke of West Point. Marlyn was preceded in death by her parents and twin brother Maclyn. Memorials may be directed to St. Mary’s Church, GACC Endowment, St. Francis Memorial Hospital, St. Joseph’s Retirement Community, or the West Point Community Foundation.