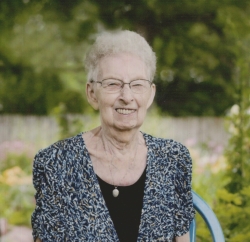 Marcella ; sally; Rennerfeldt, 88, of West Point, died Sunday, April 17, 2016 at Fremont Health Medical Center. Funeral Mass will be 10:30am on Thursday, April 21 at St. Mary’s Catholic Church with Reverend Steve Emanuel as celebrant. Burial will be at St. Michael’s with lunch following at the Nielsen Center. Visitation will be Wednesday from 12:00pm to 7:00pm with Guild Rosary at 1:30pm and Vigil Service at 7:00pm all at Stokely Funeral Home. Memorials may be made to Masses or for later designation by the family. Marcella Marie Rennerfeldt was born on February 3, 1928 to Leona Wolken in West Point. Sally was raised by her mother, Leona, and stepfather, Clifford Davis, and graduated from Guardian Angels in 1945. On September 12, 1950, Sally married Harland Rennerfeldt at St. Mary’s Catholic Church. She was a wonderful homemaker and mother to their four children. At the age of 65, Sally began her iconic 22 year employment at McDonald’s where she was an original employee. Her cheerful face and warm heart will be missed by every customer. Sally was a member of St. Mary’s Catholic Church, Guild, and spearheaded St. Mary’s Bingo. She loved card games, bingo, and going to the casino. Most of all, Sally relished the time she spent with her family. Sally is survived by her son Gary (Anna) Rennerfeldt of Dakota Dunes, SD; daughters Diane (Greg) Wermers of Fremont, NE, Donna (Gene’Joe’) Murphy of Brentwood, CA, and Deb (Mike) Dreher of Norfolk; grandchildren Gina (Chad) Taylor, Lisa (Zak) Klein, Kim Hadcock, Mark Hadcock, Kari (Tom) Ramseth, Amy (Drew) Gaschler, Tommy Murphy, Heather Rennerfeldt, Michael Rennerfeldt, Matt Dreher, Emily Dreher, and Jeremy Dreher; ten great-grandchildren and two great-great-grandchildren. She is preceded in death by her parents and husband, Harland, in 2012. Visit Sally’s living obituary at www.forevermissed.com/sally-rennerfeldt