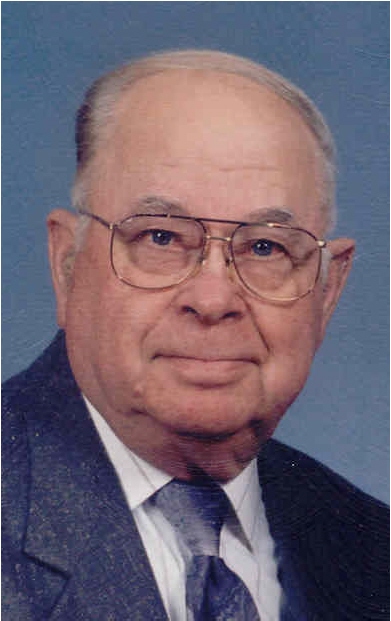 Louis H. Reimers, 93, of West Point, died Sunday, July 29, 2012 at St. Francis Memorial Hospital in West Point. Services will be 1:30 pm Wednesday, August 1, 2012 at St. Paul Lutheran Church with Reverend Richard Bringewatt officiating. Burial will follow at Mount Hope Cemetery. Visitation will be noon to 8:00 pm Tuesday at Stokely Funeral Home with family receiving friends from 5:00 pm to 7:00 pm. Memorials may be made to St. Paul Lutheran School, St. Joseph’s Retirement Community Foundation or Colonial Haven Nursing Home. Stokely Funeral Home is in charge of arrangements. Louis was born January 1, 1919 southeast of West Point in Cuming County, to Walter and Johanna (Wiechman) Reimers. He attended country school at District 15. On April 24, 1940, Louis married Dorothy Slagle at St. Paul Lutheran Church. The couple lived on the family farm until moving to town in 1979. Louis had Reimers Seed and Supply for over 50 years, then, in 1984 established Reimers Auction. He was a member of St. Paul Lutheran Church. Through the years he served on District 52 school board, and the Cuming County Township Board. He resided two years at St. Joseph’s Retirement Community and in February of 2012 moved to Colonial Haven in Beemer. Survivors include son Gary (Connee) Reimers all of West Point, daughter Marlene (Kenneth) Heinsohn of Fremont, grandchildren Laura Heinsohn, Brian (Lou) Reimers and their sons, Christopher, Garret and Jacob, all of West Point, Barry (Pam) Reimers of Valdosta, GA and their son Andrew. He is preceded in death by his wife, Dorothy, May 4, 2011, his parents, brothers Julius, Harvey and Wallace, and sisters Margaret Knuppel, Lillian Beutler and Emma Schmader.