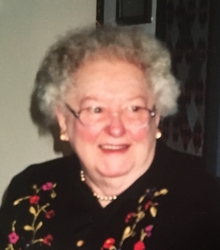 Lorain C. Will, 95, of Indianapolis, IN died Monday, September 25, 2017 in Indianapolis. A graveside service will be held on Saturday, September 30 at 11:00am at Mount Hope Cemetery in West Point, NE with Pastor Les Parmenter as officiant. Lorain was born February 25, 1922 to Henry and Emma (Schiermeier) Will in West Point, NE. She grew up on a farm outside West Point and graduated from West Point High School in 1940. She received her undergraduate degree from the University of Nebraska and a masters degree in social work from the University of Denver. Lorain started her career in Minneapolis but spent over 50 years in Indianapolis Indiana. She enjoyed returning to West Point until the last few years to visit relatives and the family farm. She also was close to her Indianapolis cousin Helen Day (also from West Point) with whom she enjoyed traveling and cheering on the Indianapolis Colts and Indiana Pacers. Lorain was active member of the Good Shepard Lutheran Church. She was also a supporter of the arts community in Indianapolis. She served as a Docent at the Indianapolis Museum of Art and a member of the auxiliaries of the Indianapolis Symphony and Clowes Hall. Memorials may be made to the West Point – Beemer Schools Foundation or the Lorain C. Will Endowment at Riley Hospital for Children in Indianapolis.