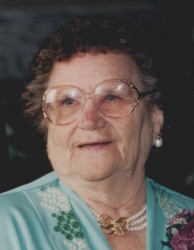 LaVerne Bloedorn, 96, of West Point died Tuesday, June 17, 2014 at West Point Living Center. Funeral Services will be 10:30am Friday at Grace Lutheran Church, with Reverend Christian Meier officiating. Burial will be at Mount Hope Cemetery. Visitation will be 9:00am until 8:00pm Thursday at Stokely Funeral Home, with family receiving friends from 5:00pm until 7:00pm. Memorials may be made to Grace Lutheran Church. LaVerne was born August 30, 1917 in Cherokee, IA, and was adopted February 4, 1919 by Grant and Birdie (Woerman) Kahler of West Point. She attended District 37 country school, and was baptized and confirmed at Grace Lutheran Church. Her first husband was Carl Kindschuh, who died in October 1947. On May 27, 1948, LaVerne married Cecil Bloedorn in Omaha. The couple lived on a farm near West Point, and LaVerne was a devoted homemaker who took great interest in her family. The couple moved into West Point in the early 1990s. LaVerne was a member of Grace Lutheran Church and American Legion Auxiliary. She enjoyed knitting, crocheting, playing cards, bingo, and gambling. Survivors include daughter Shirley Gant of Chanute, KS; sons Robert’Bucky’ (Joyce) Kindschuh and Garrey Kindschuh, both of West Point; and several grandchildren, great-grandchildren, and great-great-grandchildren. LaVerne was preceded in death by her parents; husband Cecil on April 4, 2014; husband Carl Kindschuh; and sons Ronald Kindschuh and Donald Bloedorn. Stokely Funeral Home is in charge of arrangements. Visit LaVerne’s living obituary at www.forevermissed.com/laverne-bloedorn