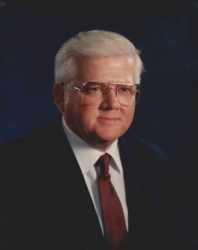 John Prenzlow, Jr., 86, of Snyder, died Saturday, November 4, 2017 at Hooper Care Center. Funeral Mass will be 10:30am on Wednesday, November 8 at St. Leo’s Catholic Church in Snyder with Fr. Keith Rezac as celebrant. Burial will be at St. Leos’s Cemetery with lunch following at the Snyder City Auditorium. Visitation will be Tuesday from 3:00pm to 7:00pm with a vigil service at 7:00pm at church. In lieu of flowers, memorials may be made to St. Leo’s Catholic Church or Snyder Fire Department. Stokely Funeral Home is in charge of arrangements. John Robert Prenzlow, Jr. was born on May 29, 1931 when the town’s whistle blew at 7:00am as the only child of John Edward Sr. and Adelia (Janssen) Prenzlow at the family home in Snyder. John was baptized and confirmed at St. Leo’s Catholic Church and graduated from Snyder High School in 1949. After graduation, John served in the National Guard and joined his father in the family meat processing business – Prenzlow and Sons. On June 11, 1952, he married the love of his life Jeanette Mary Ortmeier at St. Leo’s Catholic Church. Together they raised six children and their commitment to each other over 65 years has been an inspiration to their family. John was a member of the Snyder Fire Department, Knights of Columbus Council No. 2272, the St. Francis Memorial Hospital Foundation Board, the Nebraska Association of Meat Processors, as well as the American Association of Meat Processors. He was the president of the Dodge County Fire Department for one year, served on the Village Board of Snyder, and was a Trustee of St. Leo’s Catholic Church. John was a story teller as well as a historian which we will all truly miss. He was a devoted husband, father, grandfather, and great-grandfather. Survivors include his wife, Jeanette, of Snyder; children, Terri (Jeff) Zajicek of Beatrice, Robin (Brad) Merchant of Norfolk, David (Marla) Prenzlow of Snyder, John (Phyllis) Prenzlow of Snyder, Barbara (Wade) Henkensiefken of Shawnee, KS, and Stephen (Kim) Prenzlow of Fremont; 14 grandchildren and 20 great-grandchildren. He is preceded in death by his parents and parents-in-law, John B. and Cecilia Ortmeier.