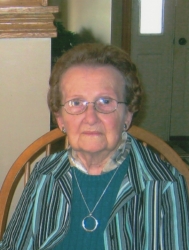 Johanna Neesen, 95, of West Point, died Tuesday, February 23, 2016 at Premier Estates in West Point. Funeral Mass will be Friday, February 26, 2016 at 10:30am at St. Mary’s Catholic Church. Burial will be at St. Michael’s with lunch following at the Nielsen Center. Visitation will be Thursday from 12:00pm to 7:00pm with Guild rosary at 1:30pm and Vigil Service at 7:00pm all at Stokely Funeral Home. Family will be receiving friends from 6:00pm to 7:00pm. Memorials may be made to St. Mary’s Endowment Fund. Johanna Anna Neesen was born on February 27, 1920 to Henry and Philomena (Doerneman) Dinslage west of West Point, near Aloys. She grew up on the farm and attended elementary school at Aloys. On January 5, 1944, Johanna married Walter Neesen at St. Aloysius Catholic Church. The couple farmed near Aloys where Johanna was an active farm wife before moving to West Point in 1989. Johanna was a member of St. Mary’s Catholic Church, Guild, and St. Francis Memorial Hospital Auxiliary. She was an avid quilter and loved spending time with her grandchildren and great-grandchildren. Johanna is survived by her daughters Lois (Jim) Kampschneider of Ogallala, Betty (Don) Oligmueller and Marla (Dale) Schmader both of West Point; son Dean (Amy) Neesen of Papillion; thirteen grandchildren; thirteen great-grandchildren; sister Helen Gentrup of West Point; and sister-in-law Theresa Dinslage of West Point. She is preceded in death by her husband Walter in 1994; parents; brothers Ted, Joe, and Leonard Dinslage; and sisters Catherine Lummel and Betty Hunke.