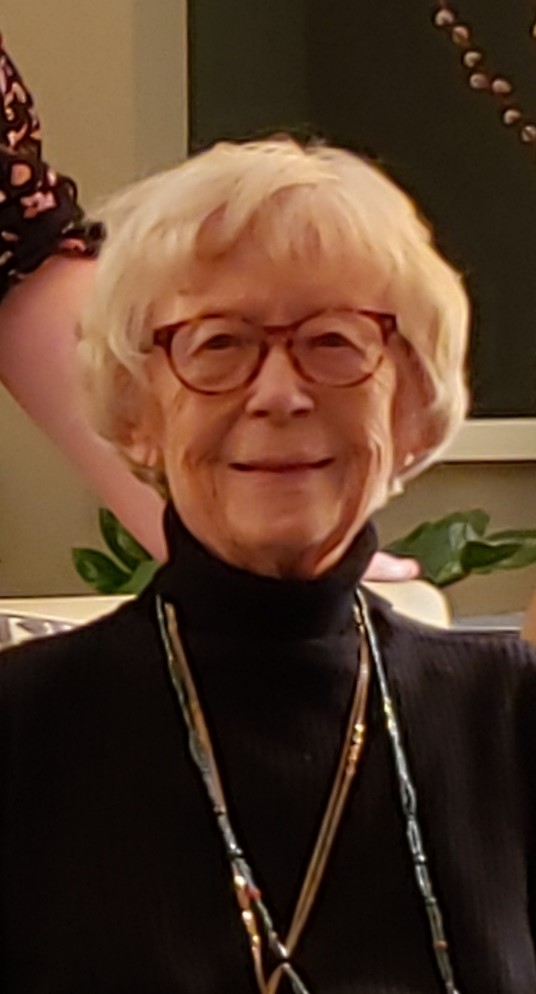 Jane Radaker Moodie was called to her final reward on February 15, 2022 in Lincoln, Nebraska.  She died peacefully in the company of family and trusted caregivers.  Funeral services will be 10:30am on Saturday, March 12 at Trinity Church in West Point with Rev. Priscilla Hukki officiating.  Burial will be at Mount Hope Cemetery with lunch following at the church hall.  Visitation with family present will be Friday, March 11 from 5:00pm to 7:00pm at Stokely Funeral Home.  Memorials may be made to Trinity Church, John A. Stahl Library, or West Point Community Theater.  Arrangements by Stokely Funeral Home.

Jane was born to Harry E. Radaker and Cella Gildersleeve Radaker in Omaha, Nebraska on November 16, 1929.  She spent her formative years growing up in railroad depots in the sandhills of northern Nebraska where her father served as a Station Master for the Chicago and Northwestern Railroad.  Eventually they landed in Wisner, Nebraska where Jane made many lifelong friends.  Jane graduated from Wisner High School in 1947.  She received an Associate’s Degree from Colorado Woman’s College and then got her Bachelor’s Degree from the University of Nebraska where she was a member of Alpha Chi Omega Sorority.

She was introduced to the man who would be her lifelong love and partner by her sorority sister, Elizabeth Moodie Prather and after spending two years teaching business classes in Madison, Nebraska she was married to Robert D. Moodie on June 16, 1953.  They were inseparable for 68 years until Dick’s passing in 2021.

Jane and Dick raised their family in West Point, Nebraska where she became a “fixture” and the very model for community involvement.  She was active in PEO and Eastern Star. She volunteered on committees for the library and was the long-time coordinator for the Red Cross Bloodmobile collection efforts.  She served in every volunteer position possible at Trinity Church and was a faithful supporter of the Community Theatre, Girl Scouts, Boy Scouts and activities in both high schools.

She loved tending the flowers in her yard, the vegetables in her garden and the time spent with many good friends.  She never came across a recipe that wasn’t worth a try.  Later in life Jane and Dick traveled the world but always returned to the house with the big front porch in West Point.