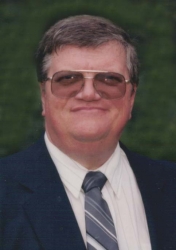 James Meier, 68, of West Point died Wednesday, June 18, 2014 at Fremont Area Medical Center, surrounded by loved ones. Memorial Mass will be 10:00am Saturday at St. Mary’s Catholic Church, with Reverend Gerald Gonderinger as celebrant. Burial will be at St. Michael’s Cemetery. Wake Service with Knights of Columbus Rosary will be 7:00pm Friday, and Visitation will be 9:00am until 7:00pm Friday, with family receiving friends from 5:00pm until 7:00pm, all at Stokely Funeral Home. Memorials may be made to St. Jude Research Hospital. James Conrad Meier was born August 27, 1945 in West Point to Conrad and Rosella (Luebbert) Meier. He graduated from Guardian Angels High School in 1963, from the University of Nebraska in Lincoln in 1971, and served in the United States Navy. On August 29, 1970, James married Leona Ridder at St. Mary’s Catholic Church. James was employed with Farmers Co-op in West Point for many years, then brought wireless internet to West Point, owning and operating Skywave Wireless. He was a member of St. Mary’s Catholic Church, Knights of Columbus, and VFW. James loved his family more than anything and enjoyed spending time with his grandchildren. Survivors include his wife Leona of West Point; mother Rosella of West Point; daughters Amy (Chris) Christensen of Lincoln, Beth Roberts of West Point, and Barbara (James) Teutsch of West Point; grandchildren Alexis, Gunar, Barrett, Jayde, Sam, and Lola; sisters Rozeanne Herman of West Point and Linda (Marvin) Eschliman of Wisner; brother Thomas (Jan) Meier of Fremont; and many nieces, nephews, other relatives, and friends. James was preceded in death by his father; parents-in-law Joe and Delores Ridder; and grandson Cole. Stokely Funeral Home is in charge of arrangements. Visit Jim’s living obituary at www.forevermissed.com/james-meier