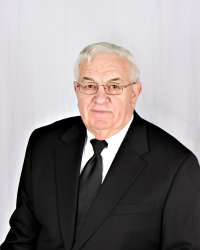 Irvin A. Hagedorn, 76, of West Point, died Thursday, December 10, 2015 at Colonial Haven nursing home in Beemer. Funeral Mass will be at 11:30am Tuesday, December 15 at St. Mary’s Catholic Church with Reverend Steve Emanuel as celebrant. Burial will be at St. Michael’s Cemetery with lunch following at the Nielsen Center. Visitation will be Monday from 9:00am to 4:00pm at Stokely Funeral Home and will continue at church from 5:00pm to 7:00pm with Wake and Knights of Columbus rosary at 7:00pm. Memorials may be made to the GACC Endowment. Irvin Anthony Hagedorn was born on March 10, 1939 to Casper and Clara (Kreikemeier) Hagedorn on the family farm in Cuming County. He attended grade school at St. Boniface Catholic School at Monterey, graduated from Guardian Angels in West Point in 1957 and served in the Army Reserve. On January 16, 1960, Irvin married Mary Jean Strehle at St. Mary’s Catholic Church. Irvin worked at Prinz and Wieler Grain and Feed before working at Patterson Dairy and retiring from Roberts Dairy after 45 years. In his retirement, he worked at Bomgaars part time. Irvin was a member of St. Mary’s Catholic Church, 3rd Degree Knights of Columbus, West Point Sportsman Club, Eagles Club, and Good Life Club. He often could be found golfing at Indian Trails Country Club, fishing, and playing cards. Irvin’s favorite card game was’31.’ He loved polka music, and in his early years, coached baseball. In his later years, he found enjoyment in his three cats: Smokey, Princess, and Bandit. Survivors include his wife, Mary Jean, of West Point; sons Scott and Jeff of Long Beach, CA, Brian of West Point, and Kevin (Jennifer) of Austin, TX; grandchildren Kayla, Hannah, and Jackson Hagedorn; great-grandson Jayden Dotson; sister Marlene (Mike) McFarlane of Lincoln; brother Jim (Liz) Hagedorn of McDonough, GA; and aunt Bertha Steuter. Irvin is preceded in death by his parents, and brothers Bill and Casper Jr. Visit Irvin’s living obituary at www.forevermissed.com/irvin-hagedorn