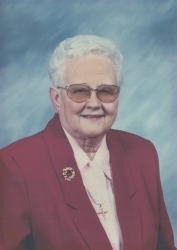 Irene Rozendal, 87, of Lincoln, formerly of West Point, died Sunday, December 13, 2015 at Country House Assisted Living in Lincoln. Funeral service will be 10:30am on Monday, December 21, 2015 at St. Paul Lutheran Church with Reverend Richard Bringewatt as officiant. Burial will be at Mount Hope Cemetery with lunch following at the church hall. Visitation will be Sunday from 12:00pm to 6:00pm with family receiving friends from 3:00pm to 5:00pm at Stokely Funeral Home. Memorials may be made to the Alzheimer’s Association or to St. Paul Lutheran School. Irene Mae Liibbe was born on December 16, 1927 to August and Anna (Stark) Liibbe in Beemer. She grew up in West Point attending St. Paul Lutheran School and graduating from West Point Public High School. After graduation, Irene was employed at the Gambles store. On June 27, 1948, Irene married Robert’Vernon’ Rozendal at St. Paul Lutheran Church. She worked alongside her husband as a bookkeeper for Elkhorn Farm Products and Terra Fertilizer for many years and retired in 1992. She moved to Lincoln in 2011. Irene was a member of St. Paul Lutheran Church and the Lutheran Women’s Ministry League. She was an avid bowler for 50 years. She loved to play cards, especially bridge and pitch and could be found traveling on bus tours. Irene passionately followed local baseball and football teams and was lucky to win many football contests. Survivors include daughters Donna (Mike) LaVelle of Anchorage, AK, Beth Rozendal and Evelyn (Bill) Sterup both of Lincoln; son Jeffrey (Mary Young) Rozendal of Nebraska City; daughter-in-law Florence Rozendal of Grand Island; grandchildren Alex Sterup, Mark Rozendal, Ryan Rozendal, and Cindy Myers; six great-grandchildren; and sister Viola Wagner of West Point. Irene is preceded in death by her parents; husband R. Vernon in 1996; son Harley in 2004; brother Leland Liibbe; and sister Ruth Raabe. Visit Irene’s living obituary at www.forevermissed.com/irene-rozendal