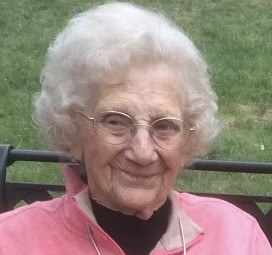 Graveside services for Irene (Classen) Benne will be 10:00am on Friday, August 12 at Mount Hope Cemetery.  Reception to follow at Grace Lutheran Church.  Arrangements by Stokely Funeral Home.

Irene Classen Benne is now in the Lord’s keeping after 103 years of life.  She died peacefully in the morning of December 31 at the Wooded Glen in Springfield.    Irene was born on July 5, 1918, of German immigrant homesteaders—George and Mary Classen—on the family farm near the town of Spencer in Boyd County, northern Nebraska, the youngest of seven children.  Coming into her teen years right at the start of the Great Depression meant that after high school she had to strike out on her own, which she did by moving to the West Point, Nebraska, area, where she worked on a farm and then in a restaurant in the town.  There she met Dallas Benne; they married in 1936 and learned how to cope with life in the midst of hard times.  The virtues of hard work, self-reliance, independence, and determination served them well over many years.  Both were life-long Lutherans who made sure their three children—Robert, Carol, and Kenneth—attended Sunday School and Church along with them.  They respected education very highly even though they were not able to go beyond high school.  All three children went on to earn college degrees and more.

Irene was a disciplined housekeeper who supplemented the family income in various part-time jobs, but her major time outside the home was given over to three activities:  church, sports, and organizing and operating a teen canteen.  She was very proud of the success of the canteen that she and husband, Dal, organized.  She continued her church and sports involvement after she and Dal moved to Springfield from West Point in 1976.  During her Springfield years her support for the Wittenberg Tigers was legendary, as was her direction of the Quilters at Grace Lutheran well into her nineties.  Not a detail in either endeavor escaped her attention.

Living in Springfield, her relationship to the three sons of Kenneth and Patricia Benne was particularly close and they revered her.  But she also knew and loved all her nine grandchildren and nineteen great-grandchildren.  Besides them, she is survived by her sons, Robert and Kenneth, and their spouses, Joanna and Patricia, and son-in-law Floyd Erickson.  Her daughter, Carol Benne Erickson, died in 1999.

Consistent with her spirit of self-reliance, Irene lived independently and alone for nearly twenty years after the death of her husband, Dallas, in 1997.  Her spunk and vitality led the family to celebrate her birthday almost yearly at the Springfield Country Club after her ninetieth year.   She danced with her great-grandchildren at her ninety-eighth birthday gathering.