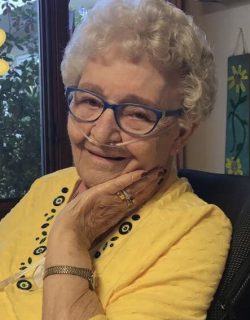 Ima Jean Dinslage, 88, of West Point, entered into eternal rest peacefully at St. Joseph’s Hillside Villa with her children at her side on November 14, 2020.  Memorial Mass will be 10:00am on Wednesday, November 18 at St. Mary’s Catholic Church with Rev. Steve Emanuel celebrating.  Burial will be at St. Michael’s Cemetery with lunch following at the Nielsen Center.  Visitation will be Tuesday from 3:00pm to 7:00pm with a vigil service at 7:00pm at Stokely Funeral Home in West Point.  The family will be present at visitation from 5:30pm to 7:00pm.  Visitation will continue at 9:00am on Wednesday at church.  The funeral service and vigil service will be live streamed on the Stokely Funeral Home Facebook page at facebook.com/stokelyfuneralhome.  Masks are recommended at the visitation and funeral and seating will be socially distanced by household.  Memorials may be made for future designation by the family.  Arrangements by Stokely Funeral Home.

Ima Jean Catherine Dinslage was the youngest of 14 children born on July 8, 1932 to John and Philomena (Vogel) Parr in Dodge. She attended St. Joseph Catholic Church and Dodge Public School.  On November 22, 1955, Ima Jean married Melvin Dinslage of West Point.  The couple lived on a farm 7 miles north of Dodge where they farmed and raised cattle, chickens, geese and ducks.  Imy also worked at Colonial Haven in Beemer.

Mel and Imy moved to Alliance in 1986 where she worked at Woolrich Coat Factory and Alliance Public Schools until she retired in 2003. They moved back to West Point in 2009 to be near family. She enjoyed being with her children, grandchildren and greatgrandchildren more than anything.