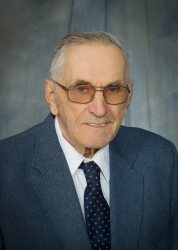 Herman E. Dvorak, 79, of Dodge, died Friday, December 4, 2015 at Golden Living Center in Clarkson. Funeral Mass will be at 10:30am on Thursday, December 10 at St. Wenceslaus Catholic Church with Reverend An Duy Phan as celebrant. Burial will be at St. Wenceslaus Cemetery with lunch following at the church hall. Visitation will be from 2:30pm to 7:00pm on Wednesday with FCSLA rosary at 3:00pm and Vigil Service at 7:00pm all at church. Memorials may be made to the St. Wenceslaus Catholic Church organ music fund. Herman Emil Dvorak was born on September 6, 1936 to Herman C. and Adella (Hajek) Dvorak in West Point. While growing up on the family farm northwest of Dodge, Herman attended St. Wenceslaus Elementary School and graduated from Dodge High School. After high school, Herman joined the Navy but was honorably discharged after boot camp in order to help with the family farm. On July 30, 1966, he married Clara Reisdorff at St. Mary’s Catholic Church in David City. Herman drove the milk truck for the Dodge dairy and worked at Dodge manufacturing. Later in life, he worked for the West Point Sale barn well into his retirement. In his retirement, Herman kept busy by driving school bus and working at Hoegemeyer Seed in Hooper. Herman was a member of St. Wenceslaus Catholic Church, FCSLA, Holy Name Society, Good Life Club, and the neighborhood card club. He was proud to have received the Nebraska Pioneer Farm Award for 100 years of ownership by one family. He enjoyed cards and puzzles and was an avid aluminum can recycler. Herman could be found closely following his grandchildren’s activities. Hidden behind a rough exterior was a kind and loving heart that was known to all who took the time to get to know Herman. Survivors include his daughter Teresa (Tom) Arens of Hartington; sons Paul (Nancy) of Dodge, and Roger (Kim) of Norfolk; grandchildren Reid and Breanna Arens, Grace, Charles, Sophia and Henry Dvorak, and Christopher and Cameron Dvorak; sisters Sr. Irene Dvorak of Omaha, and Martha (Jerry) Minchow of Davey; brother Fr. Frank Dvorak of Omaha; sister-in-law Sharon Reisdorff of David City; and many nieces and nephews. Herman is preceded in death by his wife Clara; his parents; and nephew Darren Minchow. Visit Herman’s living obituary at www.forevermissed.com/herman-dvorak