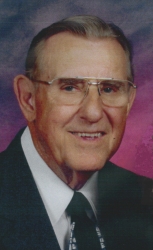 Harry Johann Breitbarth, 96, of West Point, died Sunday, September 3, 2017 at the Stanton Nursing Home. Funeral service will be 11:00am Wednesday at Grace Lutheran Church with Reverend Carl Kramer as officiant. Burial will be at Mount Hope Cemetery with lunch following at the church hall. Visitation will be Tuesday from 12:00pm to 7:00pm at Stokely Funeral Home. Memorials will be designated by the family at a later time. Stokely Funeral Home is in charge of arrangements. Harry J. Breitbarth was born on March 11, 1921 to Edward and Hulda (Longe) Breitbarth at the family home near Bancroft. He attended grade school in rural Cuming County. On June 27, 1943, Harry married Elaine Eleanor Schrader at Grace Lutheran Church in West Point. Over the years, he was employed by Farmers Union Grocery Store and Robert’s Insurance Agency in West Point. Harry was active in the community and Grace Lutheran Church. He and Elaine helped coordinate projects to raise money for the upkeep of the cemetery, including the ice cream socials held at church. They also helped organize the annual spring cleaning at Mount Hope Cemetery. In 2010, Harry fulfilled the couple’s wish and donated funds for the entire east entrance project at the cemetery. Survivors include his sister, Edna Bettenhausen of West Point; brother, Art Breitbarth of Fremont; and several nieces and nephews including Janet Surls, whom he and Elaine helped raise. He is preceded in death by his parents; wife, Elaine; brothers, Myron, Emery, LeRoy, and Ralph; sisters-in-law, Mylet, Arlie, Oma, Phyllis, and Marie; and brother-in-law, Wilmer Bettenhausen.