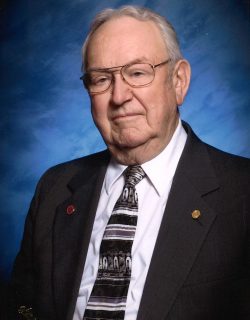 Gerhard Broekemeier, 93, of West Point, was called to his heavenly home Friday, November 6, 2020.  A celebration of his life and eternal salvation will be 10:30am Friday, November 13 at St. Paul Lutheran Church in West Point with Reverend Robert Schilling officiating.  Burial with Military Honors will be at Mount Hope Cemetery.  Visitation will be Thursday from 12:00pm to 7:00pm with family receiving friends from 5:00pm to 7:00pm at Stokely Funeral Home.   Masks will be required at the visitation and funeral and seating will be socially distance by household.  The funeral will be live streamed on the Stokely Funeral Home Facebook page at facebook.com/stokelyfuneralhome.  Memorials may be made to St. Paul Lutheran Church.  Arrangements by Stokely Funeral Home.

Gerhard Herman Broekemeier was born on 3 July 1927 to Wilhelm and Wilhelmina Broekemeier in Stanton County, south of Pilger. He was baptized at St. Matthew Lutheran Church rural Wisner and confirmed at Zion Lutheran Church rural Bancroft. He moved north of Beemer at age three and attended District #59 School through fourth grade, then moved north of West Point and attended Zion Lutheran School rural Bancroft through eighth grade. Gerhard graduated from Bancroft High School in 1944, then farming for several years until registering for the draft. He served in the United States Army from 1946 to 1952, which included one year in Korea. Gerhard married Mae Ida Schmidt on 28 August 1954 at St. Paul Lutheran Church in West Point. She preceded him in death in 2009.

Following his military service, Gerhard went to work in the construction business with his father and brother, retiring in 2008 after almost 60 years of building houses, farm buildings, and commercial construction throughout Cuming County and surrounding areas. Gerhard joined St. Paul Lutheran Church in West Point in 1948, serving on many boards and holding various church offices, as well as singing in the choir. His favorite pastimes included spending time with his children and grandchildren, playing various card games, listening and singing to polka music, watching sports, and conversing in German whenever he had the opportunity.