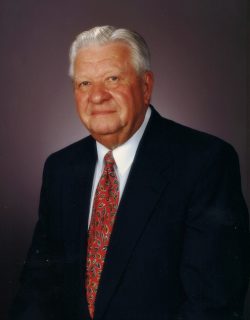 Francis M. Schinstock was born on September 13, 1922 to Henry and Anna (Fischer) Schinstock in West Point.  He grew up in West Point and graduated from Guardian Angels School in 1939.  He served in the United States Army from 1943-1946 during World War II.  Francis became a Master Sargent headquartered at the 63rd Army Field Hospital where he was head of his battalion.  He was accepted into the Aviation Cadet Program at the University of Pittsburgh where he earned his pilot’s license.  On October 10, 1948, Francis married Marilyn Albertsen at St. Mary’s Catholic Church in West Point.  Francis worked for Purina Chows in West Point as bookkeeper and office manager for 43 years.

Francis was a member of St. Mary’s Catholic Church where he lectored for many years.  As a member of the Knights of Columbus, he served as recording secretary for 60 years.  He was also the secretary and treasurer for the West Point Lions Club for 25 years.   Francis enjoyed hunting, fishing, and golfing – which showed in his 2 hole-in-one awards.

Francis is survived by his wife, Marilyn, of West Point; children, James (Maria) of West Point, Jeanne of Omaha, Clark of Norfolk, Ronald (Kelli) of Omaha, and Keith of Omaha; grandchildren, Anita, Sabrina, Kyle, and Mitchell; and sister, Elizabeth Bliemeister of West Point.  Francis is preceded in death by his parents and brother, Wilfred.