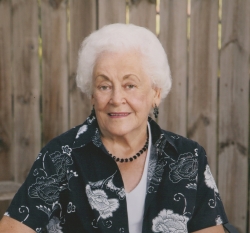 Ethel Ahrens, 91, of West Point, died Saturday, March 12, 2016 at her rural West Point home. Memorial service will be 10:30am on Wednesday, March 16 at St. Paul Lutheran Church with Reverend Richard Bringewatt officiating. Burial will be at Mount Hope Cemetery with lunch following at the church hall. Visitation will be Tuesday from 12:00pm to 7:00pm with family receiving friends from 5:00pm to 7:00pm at Stokely Funeral Home. Memorials will be directed to family choice. Ethel Mae Ahrens was born on March 24, 1924 to Emma Becker Lampe in Wisner. She graduated from Wisner High School in 1942 and went on to Normal Training to become a teacher. On May 4, 1944, Ethel married Earl Ahrens at Trinity Lutheran Church in Fremont. The couple moved to the farm east of West Point where Ethel was an active farm wife. Starting in the late 1970’s, she worked as a teacher’s aide at West Point Public High School. Ethel was an avid 4-H supporter and encouraged her children to be active as well. She also took great pride in their farm house where she lived for 71 years until her death. Ethel was a member of St. Paul Lutheran Church, Lutheran Women’s Ministry League, and the Midway Extension Club. She loved a good card game and was member of several card clubs. Ethel was known for her cooking, especially her fried chicken and enjoyed going out for breakfast on Saturday mornings with friends. Ethel is survived by her daughters Barbara (William) O’Hare of Windsor, CO, Bonnie Ahrens and Beverly (Michael) Wieler both of West Point; son Ron (Cindy) of West Point; grandchildren Kari (Roy) Ritter, Sean (Tara) O’Hare, Marci (Terry) Taylor, Amy (Timothy) Young, and Jessie and Katlyn Ahrens; great-grandchildren Seth (fiancé Kaitlin Hintz), Chelsea, Brandee, and Zachary Ritter, Calen and Mason Hinze, Kiya and Brin Taylor, Tanner, Jenna, and Brady Cardenas, Emily and Autumn Young, and Grayson and Finnley O’Hare; and sister Shirley (Tom) King of Plant City, FL. Ethel is preceded in death by her husband, Earl, mother, and brothers LeRoy Lampe and Bob Sanning.