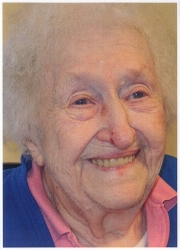 Erma Hunke, 92, of Stanton, formerly of Pilger, died Friday, September 12, 2014 at Stanton Health Center. Funeral Mass will be 10:30am Monday at St. Peter’s Catholic Church in Stanton, with Reverend Jerry Connelly as celebrant. Burial will be at St. Henry’s Cemetery. Wake Service will be 7:30pm Sunday, and Visitation will be 5pm until 7:30pm Sunday, both at the church. Memorials may be made to the choice of the donor. Erma Irene Heller was born November 17, 1921 in Howells to Fred and Emma (Dolezal) Heller. She attended country school District 46 in Stanton County and was raised by her grandparents, the Albert Hellers. On April 2, 1940, Erma married Gerhard Hunke at St. Henry’s Catholic Church north of Howells. The couple farmed north of Howells until 1944, when they moved to a farm south of Pilger. Gerhard was killed in a pick-up/train accident in April 1959. Erma moved to Norfolk in 1974 and worked as a nurse aide in nursing homes in Wisner, Stanton, and Norfolk. She returned to Pilger in 1978, and moved to Regency West assisted living of Stanton in August 2008. Erma was a member of St. Peter’s Catholic Church in Stanton and a 40-year member of VFW Auxiliary. She enjoyed hand-quilting and crocheting. Survivors include sons Dale (Peggy) Hunke of Pilger and Leon Hunke of Dodge; daughters Ellen Konsel of Dodge and Glenda (Jerry) Wiedeman of Norfolk; 13 grandchildren; 21 great-grandchildren; and two great-great-granddaughters. Erma was preceded in death by her parents; husband Gerhard in 1959; son-in-law Allyn Konsel; brother Merlyn Heller; half-brothers Gene and Robert Heller; and step-sisters Mildred Vahle and Dorothy Mille. Stokely Funeral Home of West Point is in charge of arrangements. Visit Erma’s living obituary at www.forevermissed.com/erma-hunke