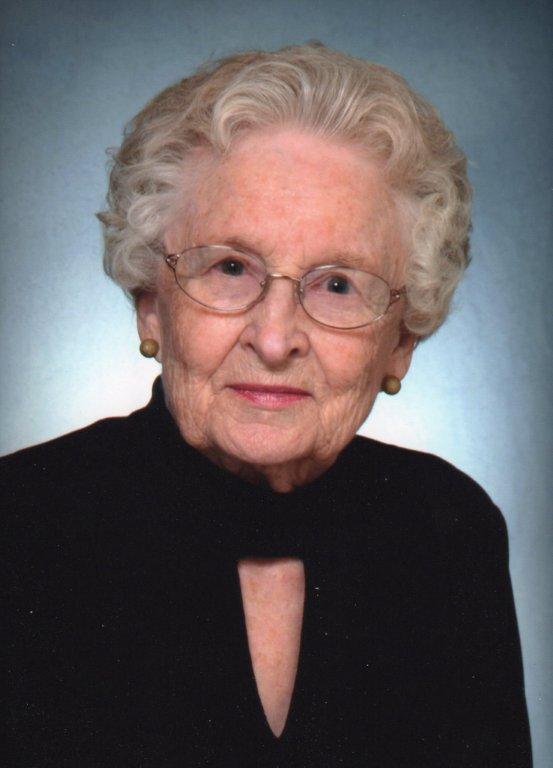 Edith Gonderinger, 92, of West Point, Nebraska, formerly of Atkinson, Nebraska, passed away Wednesday, April 24, 2013, at St. Francis Memorial Hospital in West Point. Funeral Mass will be 10:30am Monday at St. Mary’s Catholic Church in West Point with Edith’s son, Fr. Gerald Gonderinger, as celebrant. Lunch will immediately follow at Nielsen Community Center, and Interment will be 4:00pm at St. Joseph’s Cemetery in Atkinson. Visitation will be 12:00pm until 5:00pm Sunday at Stokely Funeral Home, with Ladies Guild Rosary at 1:30pm. Rosary service will be 7:00pm Sunday at St. Mary’s Catholic Church. Edith Patricia (nee Westrom) Gonderinger, born in rural Stuart, Nebraska on September 12, 1920, was the youngest child of Christopher and Mary (Krziza) Westrom. Edith grew up 10 miles south of Stuart on land homesteaded by her grandfather Vincent Krziza, and she graduated from Atkinson Public High School in 1938. Edith married Gerald Gonderinger December 27, 1939 at St. Boniface Church in Stuart. The couple had four children, and Edith owned and managed the Atkinson Flower Shop in Atkinson. Later, she and her husband bought and managed the Atkinson Wheel-Inn Motel. After ten years of hotel ownership, they retired to a house near the hospital overlooking the Elkhorn River. Edith’s husband, Gerald, was a deacon and very active in St. Joseph’s (Atkinson) and St. Boniface (Stuart) parishes. Eighteen months after her husband’s death due to cancer in 2004, Edith moved to St. Joseph’s Retirement Community in West Point (across the street from St. Mary’s Church rectory, where her son, Fr. Gerald, lives). Edith was a happy and contented resident of St. Joseph’s Retirement Community for 7′ years until her death. Edith was known for her creativity in the flower shop, and she and her husband were actively involved in the priesthood of their son Gerry. They made candles, vestments, chalices, and many wooden items that are still being used at several parishes. Edith loved crossword puzzles and was an avid reader in her early days. Her sense of humor, deep faith, and positive attitude had a great effect on those who knew her. Her ability to adjust to and accept the limitations of older age and illness was a real inspiration to her family. Edith is survived by her children Terry (Theresa) Gonderinger of El Paso, TX, Fr. Gerald Gonderinger of West Point, Mary Jo (Dennis) Jeffrey of Lincoln, and Andrea (Don) Walz of Sioux Falls, SD; grandchildren Bryan and Lisa Gonderinger, Dean and Travis Jeffrey, and Matthew, Michael and Scott Walz; eleven great-grandchildren; and one great-great-grandchild. Edith was preceded in death by her husband Deacon Gerald Gonderinger; parents Christopher and Mary Westrom; and sisters Delores (Bernard) Conway, Esther (Ralph) Chittick, and Bernice (Robert) Keating. As a florist, Edith appreciated and loved flowers. Any memorial donations may be given to St. Joseph’s Church in Atkinson, St. Mary’s Church in West Point, or St. Joseph’s School in Atkinson.