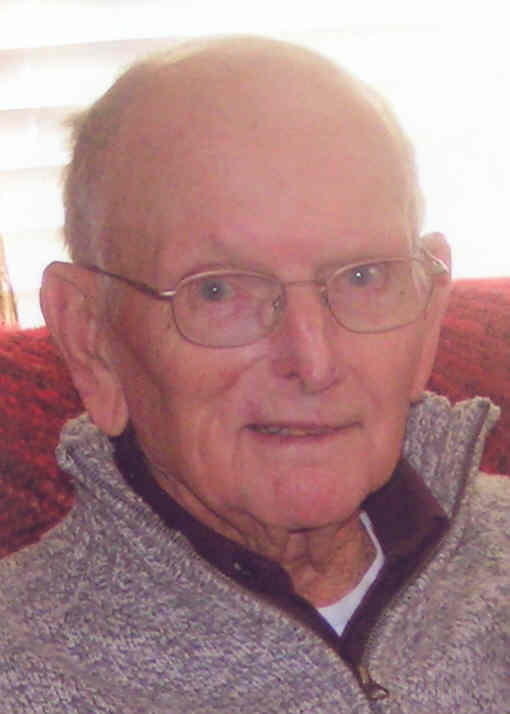 Dwain Molle, 91, of Snyder died Friday October 18, 2013 at St. Francis Memorial Hospital in West Point. Funeral Services will be 10:30am Monday at Stokely Funeral Home Chapel in West Point, with Sister Marcia Baumert, Chaplain St. Francis Memorial Hospital, officiating. Burial with military honors will be at St. Leo’s Catholic Cemetery in Snyder. Visitation will be Noon until 8:00pm Sunday at Stokely Funeral Home, West Point, with family receiving friends 5:00-7:00pm. Memorials may be made to Snyder Fire & Rescue and Snyder VFW. Dwain Herman Molle was born February 3, 1922 in Snyder to Charles and Dora (Kroenke) Molle. Dwain grew up in Snyder, graduating from Snyder High School in 1941. Dwain was a member of the US Navy from 1942 to 1945, serving in the Pacific during WWII. On February 1, 1953, Dwain married Victoria “Vicky” Emanuel in West Point. The couple lived in Snyder and moved to St. Joseph Retirement Community in West Point in 2008. Dwain’s grandfather Frederick, his father Charles, and other members of the extended Molle family were directly involved in the formation and building of the Village of Snyder. Following his military service, Dwain continued the building tradition, and as Molle Building & Remodeling left his mark on many homes and other structures in Snyder and surrounding communities. The family legacy continued as his sons learned the construction business under his mentoring. Dwain was a member of Snyder VFW, served on the Snyder Town Board for 15 years, and was a Snyder volunteer fireman for 25 years. In 1964, for the rescue of a child from a well, Dwain received the AkSarBen Heroism Award. Survivors include children Nancy (Jerry) Klein of Concord, OH, daniel (Kathy) Molle of Fremont, Marla (David) Prenzlow of Snyder, and Scott Molle (Kim Mlnarik) of Norfolk; grandchildren Nathan (Christy) Prenzlow, Josh (Adrianne) Klein, Jamiee (Drew) Santin, Alexis Klein, Amy Molle, and Jenna Molle; great-grandchildren Campbell, Marley, and Mila Prenzlow and Avery Santin; sisters-in-law Mildred Emanuel of North Bend and Elvera Molle of Omaha. Dwain was preceded in death by his parents; wife Vicky in 2009; infant sister Laverda; sisters Berdene Tank and Bernece Kimel; brother Leon; brothers-in-law Melvin Tank and James Kimel. Stokely Funeral Home is in charge of arrangements.