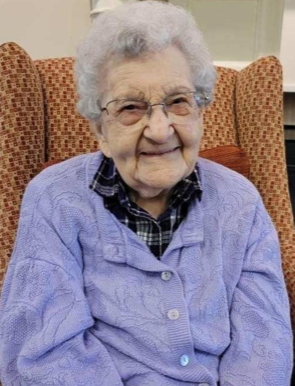 Dorothy A. Bose, 107, formerly of West Point, died Monday, August 30, 2021 at Nye Pointe in Fremont.  Funeral Mass will be 10:30am on Saturday, September 4 at St. Mary’s Catholic Church in West Point with Rev. James Weeder as celebrant.  Burial will be at St. Michael’s Cemetery with lunch following at the GACC Cafeteria.  Visitation will be Friday from 12:00pm to 7:00pm with a rosary at 7:00pm at Stokely Funeral Home in West Point.  Masks are optional at the visitation and funeral.  Memorials may be made to St. Joseph’s Elder Services Foundation in West Point.  Arrangements by Stokely Funeral Home.

Dorothy Bose was born on June 17, 1914 to John and Katherine (Schmuecker) Bose in West Point.  She attended school at St. Boniface Catholic School at Monterey to the 8th grade.  Dorothy helped on the family farm before moving to West Point in 1954.  She worked in the dietary department at St. Francis Memorial Hospital before retiring in 1984.

Dorothy was a member of St. Mary’s Catholic Church, Guild, and Catholic Daughters.  She enjoyed crocheting, sewing, quilting, and tending her garden.

Survivors include her sister-in-law, Dolores Bose, of Fremont and several nieces and nephews.  She is preceded in death by her sisters, Elenor Goeken, Theresa Kloke, and Catherine Bose and brothers, John, Anton, and Arthur Bose.