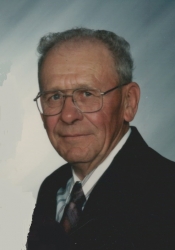 Donald Peatrowsky, 82, of West Point, died Saturday, August 22, 2015 at Colonial Haven Nursing Home in Beemer. Funeral Mass will be Friday, September 4 at 10:30am at St. Mary’s Catholic Church with military honors to follow. Burial will be at a later date. Visitation will be from 9:00am to 8:00pm with Knights of Columbus rosary at 7:00pm Thursday, September 3 all at Stokely Funeral Home. Memorials may be made to the Sunshine Center. Donald Henry Peatrowsky was born on January 5, 1933 to Nicholas and Barbara (Schuetze) Peatrowsky in West Point. Don attended District 22 country school through the eighth grade and received a degree in carpentry from Milford. He joined the Army in 1953 and served in Japan before being honorably discharged in 1955. On February 5, 1958, Don married Odelia Vogel at Sacred Heart Catholic Church at Olean. The couple farmed north of West Point. Don was a member of St. Mary’s Catholic Church and Knights of Columbus 3rd Degree. He enjoyed tinkering in his shop and building scaled down toys. Don is survived by his sons Greg (Sonya) of Pender and Dennis (Juli) of Omaha; grandchildren Andrew (Lindsey) of Pender, Katie Peatrowsky (Jon Nachtman) of Norfolk, Sydney, D. J., and Spencer all of Omaha; great-grandchild Drew of Pender; sisters Dolores (Norbert) Oligmueller of West Point and LaVerne (Tony) Klein of Pierre, SD; and many nieces and nephews. Don is preceded in death by his wife, Odelia, in 1998, his parents, and his brother, Ed.