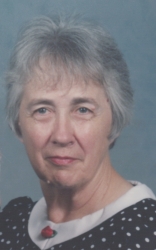 Delilah Mae Schmidt, age 86, of Omaha, went home to be with the Lord Jesus on November 7, 2014. Funeral services 11:00am Thursday at St. Paul Lutheran Church in West Point, with Reverend Richard Bringewatt and Clint Poppe officiating. Burial at Mt. Hope Cemetery. Visitation one hour prior to services at St. Paul Church. Memorials may be made to Alzheimer’s Association. She was born May 3, 1928 at Bancroft to Theodore and Mathilda (Prawitz) Bucholz, was a 1946 graduate of West Point Public High School and worked as a telephone operator in her early teens. Delilah married her high school sweetheart, Walter R. O. Schmidt, on October 16, 1949 in West Point, where they lived for 35 years before moving to O’Neill. The couple raised three children, Connie, Ronald and John, and infant son, Donald, died shortly after birth. Delilah was a dedicated wife and mother, loved her Lord Jesus, and lived His love with others freely. She will be remembered for her love, faith, laughter, love of nature, and caring spirit. She will be missed by all who know and love her. Praise the Lord Jesus for her life among us!Survivors include her husband of 65 years, Walter Schmidt of Omaha; sons Ronald (Barbara) of Lincoln, John (Pam) of Omaha; daughter Connie (Joel) Engelbart of Elkhorn; grandchildren Aaron Engelbart and Leah Mendel, Paul Schmidt, Sarah Navratil, Rachel Schmidt, Theresa Schmidt, Laura Schmidt and Anna Mae Schmidt; great-grandchildren Avery Mae Schmidt, Calvin Schmidt, Elise Mendel and Elliana Navratil; brother Theodore (Lorraine) Bucholz; sisters Vera Warner and Marcella Wilde; and many nieces and nephews. She is preceded in death by her parents; brother Oral Bucholz; brothers-in-law Kenneth Wilde and Myron’Red’ Warner; and infant son Donald in May of 1954. Stokely Funeral Home is in charge of arrangements.