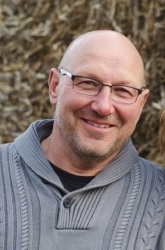 David Guenther, 57, of West Point, died Saturday August 26, 2017. Funeral Mass will be 10:30am Wednesday at St. Mary’s Catholic Church with Reverend Steve Emanuel as celebrant. Burial will be at St. Michael’s Cemetery with lunch following at the Nielsen Center. Visitation will be Tuesday from 9:00am to 4:00pm at Stokely Funeral Home and will continue at church from 5:00pm to 7:00pm with Knights of Columbus rosary at 7:00pm. In lieu of flowers, memorials may be made to GACC Endowments. Stokely Funeral Home is in charge of arrangements. David Lee Guenther was born on January 16, 1960 to Albert and Irene (Langhorst) Guenther in West Point. David attended Guardian Angels Elementary School and graduated from West Point Central Catholic in 1978. On August 7, 1982, David married Jean Ulrich at St. Boniface Catholic Church. He worked for IBP and West Point Dairy before joining the family farm at Ulrich Cattle Inc. for the last 28 years. David was member of St. Mary’s Catholic Church, Parish Council, Knights of Columbus, and Cuming County Feeders. He was very active in the church and GACC school system. David arguably had the biggest heart and was without a doubt the loudest voice in the room. His passion for farming was obvious, especially with cattle. He was an avid fisherman, a trait he learned from his father, and enjoyed many fishing trips with friends who enjoyed Crown and lots of laughs. David was known to have a sweet tooth, a cocktail in his hand, and something ornery to say when he embraced you. David’s favorite place in the world is their family cabin at Hidden Meadows where he spent time with the people he loved most: family & friends. Survivors include his wife, Jean, of West Point; children, Adam (Hannah) of West Point and Caitlyn of Lincoln; granddaughter, Charlotte; parents, Albert and Irene Guenther of West Point; sisters, Mary Jean (Brian) Fitzgerald of Bennington, Debbie (Dan) Huffington of Centralia, MO, and Nadine (Dan) Menke of Bennington; brothers, Alan (Natalie) of West Point, Gary (Karen) of Peachtree City, GA, and Brian (Ann) of West Point; and parents-in-law Larry and Janet Ulrich of West Point. David is preceded in death by his grandparents.