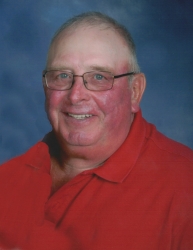 Dale Becker, 68, of Scribner, died Saturday, May 20, 2017 at St. Francis Memorial Hospital. Funeral Mass will be Wednesday, May 24 at 10:00am at St. Leo’s Catholic Church in Snyder with Reverend Keith Rezac as celebrant. Burial with military honors will be at the Scribner Cemetery with lunch following at the Snyder City Auditorium. Visitation will be Tuesday from 5:00pm to 8:00pm with a Vigil Service at 7:00pm all at church. Memorials may be made to Snyder Rescue or St. Leo’s Catholic Church. Stokely Funeral Home in charge of arrangements. Dale Emil Becker was born on August 10, 1948 to Earl S. and Therese J. (Maas) Becker in Fremont. Dale was baptized on September 5, 1948 and confirmed in 1964 at Immanuel Lutheran Church in Snyder. He graduated from Snyder High School in 1966. After high school, Dale joined the Army Reserves and worked at the Scribner Implement. After the death of his father in 1968, Dale took over the family farming operation. On October 16, 1971, he married Mary E. Wieneke at St. Leo’s Catholic Church where he became an active member. The couple continued to farm in rural Snyder as well as be co-owners of B and B Bakery in Dodge. Dale served on the Parish Council and was an usher at St. Leo’s. He was a member of the Dodge Saddle Club and Snyder Community Club. Being a lifetime farmer, Dale passed on his love of agriculture by being a 4-H leader for 20 years, serving on the Dodge County 4-H Council, and supporting the Scribner-Snyder FFA. He was also passionate about International tractors. Dale loved his children and grandchildren and everything they were involved in. Survivors include his wife, Mary of Snyder; son, Lynn (Shari) of Lincoln; daughters, Lisa Becker of Lincoln and Kimberly (Aaron) Fehringer of Clarkson; grandsons, Nathan and Toby Becker, and Cash, Cooper, and Coy Fehringer. He is preceded in death by son, Dale Allen Becker in 1989; his parents; and parents-in-law, Vincent and Adeline Wieneke.