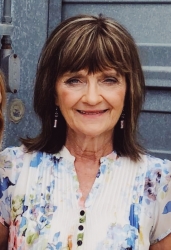 Cheryl “Cherrie” (Rabe) Schuetze, 65, of Orange Park, FL, died Thursday, September 19, 2019 in Orange Park, FL.  Memorial service will be 10:30am on Monday, October 21 at Stokely Funeral Home in West Point with Chaplain Mitch Shemek as officiant.  Burial will be at Zion-St. John’s Cemetery – rural Wisner with lunch following at the Nielsen Center.  Visitation will be Sunday, October 20 from 12:00pm to 5:00pm with family receiving friends from 3:00pm to 5:00pm at Stokely Funeral Home.  Memorials may be made to Lupus Foundation of America or the GACC Endowment.

Cheryl Lynn Schuetze was born on July 26, 1954 to Elton and Alice (Prawitz) Rabe in West Point.  She was baptized and confirmed at St. John’s Lutheran Church – rural Wisner and graduated from Wisner-Pilger High School in 1972.  Cherrie attended Kearney State College before returning to West Point where she raised her family.  On August 1, 1987, Cherrie married Allan Schuetze in Hawaii.  The couple lived in Illinois and Indiana before moving to Orange Park, FL in 2012.

Cherrie loved to be outdoors in the warm weather wearing her flip flops and enjoying the hummingbirds chirping around her patio.  When she was indoors, Cherrie liked to watch True Crime documentaries and dramas with the company of her beloved cats.  She was an avid Husker football fan and Allan and Cherrie were season ticket holders for the Jacksonville Jaguars.  Shopping and cruises brought joy to her life, but most of all she loved the time she spent with her grandchildren.

Cherrie is survived by her husband, Allan, of Orange Park, FL; children, Ryan (Michelle) Petersen of Bennington and Heather (Todd) Kreikemeier of West Point; grandchildren, Gracie and Jarek Petersen and Zoey and Ian Kreikemeier; sister, Jeannie (Harlan) Horst of Altamont, MO; niece Jana (Clay) Fielder of Kansas City, MO; and nephew, Jamin (Cheryl) Horst of Lincoln. Cherrie is preceded in death by her parents, Elton in November of 2013 and Alice in June of 2019.