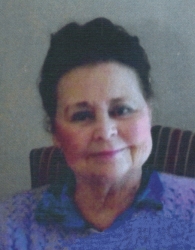 Bonnie Dorner, 76, of West Point died Sunday, October 18, 2015 at Wisner Care Center. Private family services will be at Mount Hope Cemetery in West Point. Bonnie Lou Einemann was born November 20, 1938 in West Point to Walter A. and Elizabeth (Malzahn) Einemann. She graduated from West Point High School in 1956 and married Charles R.’Bobby’ Dorner on April 13, 1957 in Battle Creek, MI. Bonnie lived in Indianapolis, IN for several years and Battle Creek, MI for many years where she was a Certified Medical Transcriptionist at the Battle Creek Sanitarium Hospital. She returned to West Point in 1991. Bonnie was famous for her egg carving and decorating. Survivors include her sister, Gretchen Einemann, of West Point and numerous cousins. Bonnie was preceded in death by her parents; and husband, Bobby, on July 28, 1993.