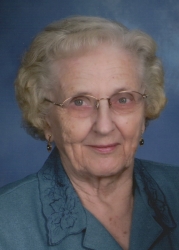 Bernice Kreikemeier, 88, of Dodge died Saturday, May 24, 2014 at St. Francis Memorial Hospital in West Point after a brave five-year fight with multiple myeloma. Funeral Mass will be 10:30am Tuesday at St. Wenceslaus Catholic Church in Dodge, with Reverend An Duy Phan as celebrant. Burial will be at St. Wenceslaus Catholic Cemetery. Christian Mothers Rosary with American Legion Auxiliary rites will be 3:00pm Monday, Wake Service will be 7:00pm Monday, and Visitation will be 2:30pm until 8:00pm Monday, all at St. Wenceslaus Catholic Church in Dodge. A memorial has been established. Bernice Theresa Liekhus was born January 30, 1926 on the family farm near Olean to Steve and Elizabeth (Knust) Liekhus. She attended Sacred Heart Academy at Olean and graduated from Howells High School in 1944. On June 19, 1945, Bernice married Arthur J. Kreikemeier at Sacred Heart Catholic Church at Olean, and they would have celebrated their 69th anniversary in a few weeks. The couple lived on several farms in the Snyder area, purchased a farm three miles south of Dodge in 1959, and semi-retired and moved into Dodge in 1983. Bernice was a member of St. Wenceslaus Catholic Church, Christian Mothers, Altar Society, St. Wenceslaus Prayer Line, and American Legion Auxiliary, holding offices in several of the organizations. She was a 4-H leader for 14 years and a clothing superintendent for the Dodge County Fair for many years. Bernice’s hobbies included sewing and quilting, and she made a quilt for each of her grandchildren and many of her great-grandchildren. She created scrapbooks for each grandchild on their high school graduation, and each Christmas every family member could count on a handmade Christmas ornament. Bernice and Arthur loved to dance, and Bernice greatly enjoyed visiting with family and friends, especially giggling with her sisters. Survivors include her husband Arthur of Dodge; daughters Phyllis (Bob) Sellhorst of Dodge, Linda (Dan) Legband of Omaha, and Joyce (Dan) Keller of Omaha; sons Glen (Rose) Kreikemeier of Dodge and Gary (Becky) Kreikemeier of Bellwood; sisters Arlene Smeal of Dodge and Alyce Janata of Howells; sisters-in-law Adana Wieneke of West Point and Eleanor Kreikemeier of Scribner; brother-in-law Dennis (Doris) Kreikemeier of West Point; 22 grandchildren; and 21 great-grandchildren. Bernice was preceded in death by her parents; daughter-in-law Betty Kreikemeier; brother and sister-in-law Dale and Angie Liekhus; sister and brother-in-law Iona and George Laudenklos; and brothers-in-law Ray Smeal, Joe Janata, Leroy Kreikemeier, and Ed Wieneke. Stokely Funeral Home is in charge of arrangements. Visit Bernice’s living obituary at www.forevermissed.com/carole-betzelberger