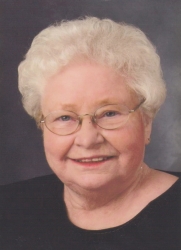 Beata Prinz, 87, of West Point, died Thursday, June 15, 2017 at St. Francis Memorial Hospital. Funeral Mass will be Monday, June 19 at 10:30am at St. Mary’s Catholic Church with Reverend Steve Emanuel as celebrant. Burial will be at St. Michael’s Cemetery with lunch following at the GACC Cafeteria. Visitation will be Sunday at Stokely Funeral Home from 12:00pm to 4:00pm with a Christian Mothers rosary at 1:30pm and visitation will continue at church from 5:00pm to 7:00pm with a Vigil Service at 7:00pm. Memorials may be made to St. Joseph’s Retirement Community, GACC High School Choir and St. Mary’s Catholic Church. Beata Agnes Oligmueller was born October 11, 1929 to William and Johanna (Ortmeier) Oligmueller in West Point. She graduated from Guardian Angels Central Catholic High School in 1947. On January 3, 1951, Beata married Thomas Prinz at St. Mary’s Catholic Church in West Point. The couple farmed and fed cattle southeast of West Point where Beata was a wonderful homemaker while raising nine children. Beata was a member of St. Mary’s Catholic Church, Christian Mothers, and Catholic Daughters. She loved music and singing. In their younger years, Beata and Thomas could be found going to Snyder on Tuesdays for the Polka dances. She also loved 4-H and was an avid sports fan. Beata was quick to love everyone she met and taught her children to value family above all else. She led by example in accepting and supporting her family and to never compete with those you love. Most of all, Beata cherished her family and guided them to cherish each other. Survivors include her children, Peggy (Ray) Luebbert of Omaha, Jane (Jack) Pekny of Columbus, Bill (Connie) of Lincoln, Patti Kreikemeier of Omaha, Joe (Ann) of West Point, Jerry (Trish) of Omaha, Mary (Dean) Kreikemeier Allen of Lee’s Summit, MO, Ron (Lauren) of Omaha, and Bonnie (Bruce) Kreikemeier of West Point; 30 grandchildren; 27 great-grandchildren; sisters, Dorothy Mendlik of Denison, IA, and Jeanie (Mike) McTaggert of Beemer; brother, Virgil (Rita) Oligmueller of Jackson; and sister-in-law, Bernie Oligmueller of West Point. Beata was preceded in death by her parents; husband, Thomas on November 15, 2002; brother, Francis Oligmueller; son-in-law, Bernard Kreikemeier; granddaughter-in-law, Misty Luebbert; brother-in-law, Richard Mendlik; and nephew, Doug Temple.