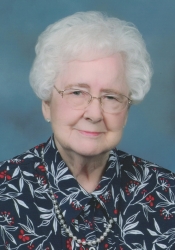 Ann H. Ernesti, 92, of Norfolk, formerly of Howells, died Friday, August 15, 2014, at Heritage of Bel Air in Norfolk. Funeral Mass will be 10:30am Monday at Saints Peter and Paul Catholic Church in Howells, with Reverend Leo Rigatuso as celebrant. Burial will be at Saints Peter and Paul Catholic Cemetery. Christian Mothers Rosary will be 3:00pm Sunday and Wake Service will be 7:00pm Sunday, both at Saints Peter and Paul Catholic Church. Visitation will be 11:00am until 1:30pm Sunday at Stokely Funeral Home in West Point, and continue from 2:00pm until 7:00pm at the church in Howells. Memorials may be made to family choice. Ann Hyacinth Ernesti was born July 4, 1922 on the family farm at St. Charles to Charles and Margaret (Stratman) Gerken. She attended St. Anthony’s Catholic School, then worked in Omaha prior to her marriage. On February 4, 1953, Ann married Leander Ernesti at St. Anthony’s Catholic Church in St. Charles. The couple farmed west of Aloys, moving into Howells in 1963. Ann was a member of Saints Peter and Paul Catholic Church, Christian Mothers, and Jolly 14 Extension Club. She enjoyed ceramics, playing cards, and traveling. In 2008, Ann moved to Homestead Assisted Living in Norfolk, where she enjoyed taking in all the activities, including art classes and learning to paint. Survivors include her daughters Carol Ann (Ron) Kluck of Schuyler and Joan (Duane) Freudenburg of Norfolk; son Clarence (Terri) Ernesti of Fremont; grandchildren Curt (Melissa) Ernesti, Mike (Jessi) Kluck, Brenda (Nate) Bahensky, and Tim Kluck; nine great-grandchildren; and sisters Clara Wiesen and Marie Gerken, both of Beemer. Ann was preceded in death by her parents; husband Leander in 1982; sisters Pauline Gerken and Charlotte Throener; and brothers Leo Gerken and Herbert Gerken. Stokely Funeral Home of West Point is in charge of arrangements. Visit Ann’s living obituary at www.forevermissed.com/ann-ernesti