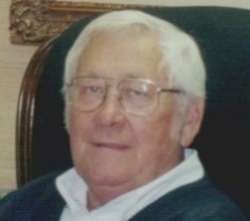 Alfred (Al) Herman Brune, 83, of Fremont, died Saturday, November 1, 2014 at Merrick Manor in Fremont. Funeral Mass 10:00am Wednesday at St. Wenceslaus Catholic Church in Dodge, with Reverend An Duy Phan as celebrant. Graveside services, with military honors, 2:00pm Wednesday at Calvary Cemetery in Fremont. Wake service 7:00pm Tuesday, with visitation 3:00pm until 8:00pm, both at St. Wenceslaus. Memorials may be made to St. Wenceslaus Organ Fund. Alfred (Al) Herman Brune was born November 14, 1930 in Freeburg, Missouri to August and Elizabeth (Reinkemeier) Brune. He graduated from Freeburg High School and then served in the Navy from 1948 – 1952 aboard the USS Rupertus. Following his discharge he attended the University of Missouri and received a degree in Accounting and then attained his Certified Public Accountant license. He was employed by Peat, Marwick and Mitchell and Co. in Kansas City and in Omaha. In 1964 Al and his family moved to Dodge, Nebraska where he began his career at Farmers State Bank and a long association and friendship with Russell Rabeler. Al also opened in own accounting practice and continued until 2005 when he and Joan moved to Fremont, Nebraska. Al and Joan (Parr) were married Aug 12, 1953 in St. Wenceslaus Church in Dodge. He was a member of American Legion Post #122 and an active member of the Board of Directors for Parkview Nursing Home. He is survived by his wife Joan; six children, Dan (Nancy) of Omaha, Jerry (Peggy) of Lincoln, Kathy of Lincoln, Tom (Sandi) of Fremont, Pat (Fred Greenblatt) of Ft. Lauderdale, Florida, and Beth (Darrell) Dinneen of Lincoln; eight grandchildren; two great-grandchildren; sister Marie (Harold) Kempker of Jefferson City, Missouri; and sisters-in-law Lucille Brune, Margaret Brune and Betty Brune. Al was preceded in death by three brothers, Vincent, Hubert and Emil Brune. Al especially enjoyed the time he spent at the cabin near Fremont with his family. Stokely Funeral Home of West Point and Dodge in charge of arrangements. Visit Al’s living obituary at www.forevermissed.com/alfred-brune