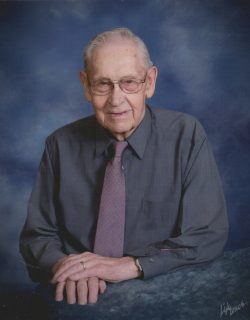 Glenn Robert Reeson was born on November 5, 1922 to Howard and Magdalena (Grunke) Reeson in West Point. He attended District #25 grade school and graduated from West Point High School in 1940. On June 3, 1947, Glenn married Lorraine Kluthe at Sacred Heart Catholic Church in Olean. The couple farmed northeast of West Point until 2001 when they moved into West Point.

Glenn was a member of St. Mary’s Catholic Church where he was a lector and EMHC. He was also a member of 3rd and 4th Degree Knights of Columbus Council #2272 where he served as Grand Knight, Faithful Navigator, and District Deputy. Glenn served on the local Farmers Coop Board of Directors for 21 years. He also served on the District 16 and one term on the National Land O’Lakes Board of Directors. Glenn enjoyed reading the newspaper, exercising at St. Francis Rehabilitation Center, doing crossword puzzles, as well as making his famous Swedish pancakes and banana bread. Glenn’s faith was very instrumental in his life. He made a pilgrimage to Fatima with Lorraine and two pilgrimages to Medjugorje in 2014 and 2016.