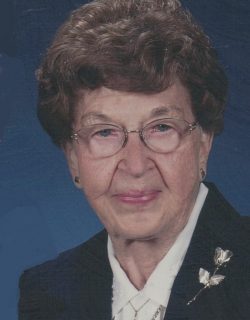 Evelyn ‘Evy’ Schulte, 96, of Council Bluffs, IA, formerly of Dodge, died Friday, October 25, 2019 at Midlands Living Center in Council Bluffs. Funeral Mass will be 10:30am on Thursday, October 31 at St. Wenceslaus Catholic Church in Dodge with Rev. Rod Kneifl as celebrant. Burial will be at St. Wenceslaus Cemetery with lunch following at the church hall. Visitation will be Wednesday from 5:00pm to 7:00pm with a Christian Mothers rosary at 4:30pm and a vigil service at 7:00pm all at St. Wenceslaus Catholic Church. A memorial has been established. Arrangements by Stokely Funeral Home.

Evelyn Isabell Schulte, the oldest and only daughter of Joe and Kathryn (Becker) Vogel was born on July 3rd, 1923 in the Doctor’s office in Howells, Nebraska. She attended Sacred Heart Academy at Olean and Howells High School. Evelyn grew up in the Dodge/Howells area where her parents farmed. On February 12th, 1946 Evelyn married William Schulte Jr. shortly after he returned home from WWII military duty in the US Army stationed in the Pacific. The couple lived in Dodge all their married life.

Evelyn worked at the School cooking and serving lunch and cooked and served at the Dodge Nursing Home for several years. She also worked as a clerk at the Kokrda Drug Store for a few years and the Election Polling Board for over 40 years.

Evelyn was active in the community. A devout Catholic and was a member of the St. Wenceslaus Catholic Church, Altar Society, and Christian Mothers. She served as a Eucharistic Minister at St. Wenceslaus Catholic Church and Park View Nursing Home. Evelyn was a very strong believer of the rosary and led the rosary at the St. Wenceslaus Catholic Church and at the Dodge Nursing Home for over 30 years.
She belonged to the American Legion Auxiliary for 61 years where she served as President for several terms. She made poppy wreaths and led the wake service for auxiliary members. Evelyn was a long-time member of the Dodge Extension Club.
Evelyn had many hobbies in addition to being an excellent cook and housewife while raising 5 children. She enjoyed plants and flowers of all kinds and won the ‘Yard of the Week’ several times. Evelyn and Bill operated a Greenhouse for 5 years during their retirement, growing and selling the best healthy vegetable plants and flowers around. Her flower baskets were a good seller.

She enjoyed refinishing antique furniture most of which were old family favorite pieces that had been handed down to her. She also loved to sing, she sang in grade school, high school, 4H and in the Olean and St. Wenceslaus Church Choirs. Evy was selected to sing on special occasions at St. Mary’s Catholic Church in Norfolk and also several times at the Cathedral in Omaha for the Archdiocese.