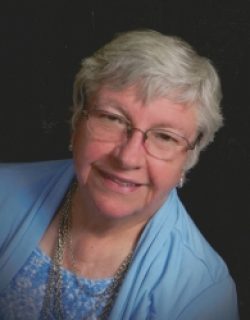 Carolyn Michaelis, 76, of West Point, died Monday, April 16, 2018 at St. Francis Memorial Hospital. Funeral Mass will be 10:30am on Friday, April 20 at St. Mary’s Catholic Church with Reverend Steve Emanuel as celebrant. Burial will be at St. Michael’s Cemetery with lunch following at the St. Paul Lutheran Church basement. Visitation will be Thursday from 12:00pm to 7:00pm with Christian Mothers rosary at 1:30pm and Vigil Service at 7:00pm all at Stokely Funeral Home. Memorials may be made to GACC Endowments. Carolyn Ann Michaelis was born on April 20, 1941 to Casper and Bernadine (Grewe) Rief in West Point. She graduated from Guardian Angels school in 1959 and went on to graduate from St. Catherine’s Nursing College in Omaha. On September 29, 1962, Carolyn married Robert Michaelis at St. Mary’s Catholic Church in West Point. Carolyn worked as a Registered Nurse at St. Francis Memorial Hospital for a few years. The couple owned and operated Bob’s Bakery for thirty years where Carolyn served many roles including decorating cakes before retiring in 2000. Carolyn was a member of St. Mary’s Catholic Church and Christian Mothers. She was very involved in numerous organizations including the Nebraska Bakers Association, West Point Chamber of Commerce, CCD, and the Mrs. Jaycees. She was an avid supporter and spectator at many GACC Bluejay sporting events. Carolyn was also active in The Arc of Nebraska which advocates for people with disabilities. Throughout her life, she showed a magnitude of selflessness and dedication to her family. Survivors include her daughters, Kelly Michaelis of West Point and Michelle (Mark) Aylor of Lincoln; sons, Robert (Colleen) Michaelis of McCook and Scott (Michele) Michaelis of Bennington; grandchildren Brandon, Connor, Evan, and Aliece Aylor, Devin (Andy) Petrzilka, Naomi Michaelis, and Thara and Kaylen Michaelis; great-grandchildren, Lilly and Amelia Metz and Xavier Petrzilka; sisters, Phyllis (Dan) Rosloniec of Kennard, Benita (Tom) Chaput of Carlisle, IA, and Mary (Bob) Foley of Omaha; and brothers, Tom (Sharon) Rief of West Point and Loren (Shirley) Rief of Lyons. Carolyn is preceded in death by her husband, Bob, and her parents.