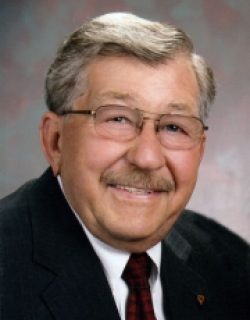 Burial of Ashes for Gordon Hultquist, 78, of Grand Island will be Wednesday morning at 11:00AM, April 27th at Mount Hope Cemetery in West Point, NE. This will also be Gordon’s 79th birthday. Gordon passed away January 4, 2016 at Tiffany Square Care Home in Grand Island. Gordon was born on April 27, 1937 on the family farm in Thurston County. Gordon was the youngest and orneriest son of Harry and Esther Hultquist. He is survived by his sons, Bradley (Jane) Hultquist of Chandler, Ariz., and Mitchell Hultquist of Phoenix, Ariz.; brother, Harold Hultquist of York; sister, Phyllis (Allan) Schultz of Moraga, Calif.; grandchildren, Luke Hultquist, Anna Hultquist, Sarah Wilson and Tarah Wells; four great-grandchildren; along with a host of extended family and friends. He was preceded in death by his wife, Lorraine, in 2012; infant triplets, Randy, Rita, and Richard; brother, Robert Hultquist; and sisters, Marilyn Pallas and Christina Hultquist. Gordon was raised and received his education in the Walthill area, graduating in 1954. Following high school, he farmed until enlisting in the U. S. Marines. After an Honorable Discharge, Gordon continued to serve in the U. S. Air Force Air National Guard where he also received an Honorable Discharge specializing in jet engine mechanics, until he met the love of his life, Lorraine Von Seggern. On Oct. 12, 1958, they were united in marriage at Grace Lutheran Church in West Point. Gordon settled back into farming between West Point and Oakland. He loved every minute of farm life. In 1972, Gordon moved the family to Grand Island and for over 30 years, he was employed by Chief Industries. Gordon was that gold watch kind of guy. He was loyal, dependable, a hard worker and had that old school pride. He had a quick wit, great sense of humor and brought joy to those around him. He passed on a lasting legacy of faith in Christ and love for his fellow man. Visit Gordon’s living obituary at www.forevermissed.com/lorraine-ann-hultquist