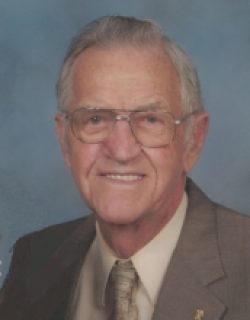 John B. Kreikemeier, 94, of West Point, died Monday, December 21, 2015 at Fremont Health Center. Funeral Mass will be at 10:30am on Thursday, December 24, 2015 at St. Boniface Catholic Church at Monterey. Burial with military honors will be at St. Boniface Cemetery with lunch following at the GACC cafeteria. Visitation will be Wednesday, December 23 from 9:00am to 4:00pm at Stokely Funeral Home and will continue at St. Mary’s Catholic Church from 6:00pm to 8:00pm with Vigil service and Knights of Columbus rosary at 7:30pm. Memorials may be made to St. Mary’s Catholic Church or St. Boniface Catholic Church. John Bernard Kreikemeier was born on December 19, 1921 to Bernard’Ben’ and Bertha (Meister) Kreikemeier on the family farm near Monterey. He was raised on the farm and attended St. Boniface School. On September 3, 1947, John married Virginia Pieper at St. Joseph’s Catholic Church in Dodge. The couple farmed at the home place before moving to West Point in 1982. John then worked for IBP and retired from Tyson after 25 years. John was a member of St. Boniface and St. Mary’s Catholic Church, Fourth Degree Knights of Columbus, and Snyder V. F. W. He enjoyed playing cards, especially sheephead, and was a member of several card clubs. John is survived by his wife, Virginia, of Fremont; sons John A. (Anita) of North Bend, Kevin (Cherie) and Thomas (Kris) both of West Point; daughters Carol (Richard) McGill of Fremont, Mary (Larry) Rihanek of Lincoln, Joan (Leon) Steffen of West Point, Marcia (Carmen) Klein of Bellevue, and Susan (Joe) Hodson of Omaha; daughter-in-law Mary (Dean) Allen of Lee’s Summit, MO; 36 grandchildren; 55 great-grandchildren; 2 great-great-grandsons; sister Bernadine Pieper of Gary, SD; and many nieces and nephews. John is preceded in death by his parents; sons Bernard in 2006 and Patrick in 1983; son-in-law Dan Slagle in 2001; brothers John A.’Jack,’ Herman, Joseph, and Reverend Leo; and sisters Gertrude Diekemper and Theresa Sellhorst.