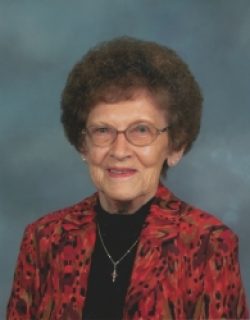 Devoted and loving mother and grandmother, Catherine’Kate’ Tingelhoff, 94, of West Point went to be with Jesus on Monday, May 18, 2015 at the Good Samaritan Center in Scribner. Mass of Christian Burial will be Thursday, May 21 at 10:30am at St. Mary’s Catholic Church. Burial with VFW Auxiliary rites will be at St. Michael’s Cemetery. Visitation will be from noon until 8:00pm with Guild and Christian Mothers Rosary at 1:30pm and Wake Service at 7:00pm Wednesday at Stokely Funeral Home. Memorials may be made to the GACC Endowment Fund. Catherine Dorothy Guetter was born July 14, 1920 in Wabasso, MN to Joseph and Emelia (Hoffman) Guetter. She grew up there, attending St. Anne’s Catholic School. In 1937, Kate married George Tingelhoff at St. Anne’s Catholic Church in Wabasso. Kate lived in West Point, where she raised her family. Kate worked at Wimmers, as an aide at the hospital, and as a waitress at Vet’s Club and Bud’s Café, retiring in the late 1990s. She was a member of St. Mary’s Catholic Church, Guild, Christian Mothers, American Legion Auxiliary, and VFW Auxiliary. Kate’s favorite pastimes included bingo, socializing, and time at the Sunshine Center. Survivors include her daughters Karen (Douglas) Brabston of Columbus, GA and Jean Ann Farmer of Orangeville, CA; sons George, Jr. of Omaha, Robert (Cherie) of Omaha, James (Debbie) of Council Bluffs, Thomas (Mary) of Omaha, and Richard (Mary Ann) of Wahoo; 24 grandchildren and several great-grandchildren and great-great-grandchildren; and sister Theresa Fischer of Wabasso, MN. Kate was preceded in death by her parents; sisters Sr. Amelia Guetter, Cecilia Walters, and Annie Walters; and brothers George, reverend Michael, John, Joe, Alois, Alphons, and Anthony Guetter. Visit Kate’s living obituary at www.forevermissed.com/catherine-tingelhoff