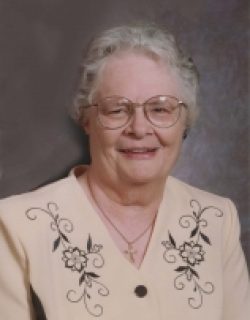 Barbara Kerby, 80, of West Point died Sunday, October 5, 2014 at St. Francis Memorial Hospital. Funeral Services will be 10:30am Wednesday at Trinity Church with Reverend Les Parmenter and Don Hill officiating. Burial will be at Baptist Cemetery, rural Uehling. Visitation will be 9:00am until 7:00pm Tuesday, with family receiving friends from 5:00pm until 7:00pm, and a prayer service at 7:00pm, all at Stokely Funeral Home in West Point. Memorials may be made to West Point Community Theatre. Barbara Jon Lee was born October 2, 1934 at home in Centerville, IA to John and Juanita (Franklin) Lee. She attended Centerville schools, graduating from Centerville High School in 1952. On July 5, 1952, Barbara married Harold Kerby at Covenant Church in Centerville. The couple lived in various communities before moving to David City, NE in 1973, then to Snyder and Uehling. In 2007, Barbara moved to West Point following her husband’s death. Barbara was a cook at Hooper Care Center from 1985 until 1996. She received her dietary manager license in 1990 after attending Metro Tech, and was dietary manager at the Center from 1996 until 2000. Barbara was a member of Trinity Church and Bible Study. Among her greatest pleasures was spending time with her family. Survivors include her children John (Debbie) Kerby of Wisner, Sheryl (Don) Hill of Kansas City, MO, Kayla (Randy) Siebrandt of West Point, and Judy (Kurt) Hansen of West Point; sister Madge (Ron) Fels of Norwalk, IA; ten grandchildren; and 13 great-grandchildren. Barbara was preceded in death by her parents; husband Harold on March 1, 2007; and infant sister Juanita. Stokely Funeral Home is in charge of arrangements. Visit Barbara’s living obituary at www.forevermissed.com/barbara-kerby