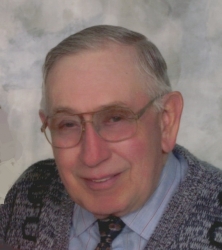 Willie Broekemeier, 94, of Beemer, died Wednesday, August 21, 2019 at Colonial Haven in Beemer.  Funeral services will be 10:30am on Saturday, August 24 at Zion Lutheran Church rural Bancroft with Reverend Ryan Seymour as officiant.  Burial will be at Zion Lutheran Cemetery with lunch following at the school hall.  Visitation will be Friday from 12:00pm to 7:00pm with family receiving friends from 5:00pm to 7:00pm at Stokely Funeral Home in West Point.  Memorials may be made to the Cuming County Fair Foundation.  Arrangements by Stokely Funeral Home.

Willie Fritz August Broekemeier was born on December 8, 1924 to William and Wilhelmina Bischoff Broekemeier on the family farm in Stanton County.  He was baptized at St. Matthew’s Church south of Pilger on January 11, 1925.  Willie attended school at Zion Lutheran School and confirmed on April 2, 1939 at Zion Lutheran Church at rural Bancroft.  On March 3, 1946, Willie married Alieta Ruehling at Zion Lutheran Church.  The couple farmed southwest of Bancroft where they raised their family. The couple retired to Beemer in June 2004.  Willie moved to Colonial Haven in 2015.

Willie was a member of Zion Lutheran Church where he held many church offices including trustee and school board.   He was a 4-H leader and enjoyed attending the Cuming County Fair.  He loved to camp and farm with the help of his 3 John Deere tractors.  Willie was a family man and devoted to his wife, Alieta.