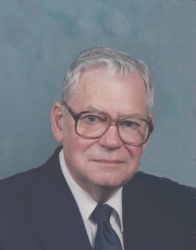 Walter Schmidt, 86, of Omaha, formerly of O’Neill and West Point, died Monday, June 15, 2015 at Parsons House Assisted Living in Omaha. Funeral service will be 11:00am Saturday, June 20 at St. Paul Lutheran church in West Point with Rev. Richard Bringewatt officiating. Burial with military honors will be at Mount Hope Cemetery. Visitation will be from 10:00am to 11:00am Saturday at church. Memorials may be made to Mount Hope Cemetery. Walter Robert Otto Schmidt was born January 12, 1929 to Otto and Helen (Horn) Schmidt in West Point, NE. Walter was an only child, but grew up with many cousins, aunts and uncles to support him. After graduating from high school in 1946, Walter entered the US Army at age 17 with his parent’s permission. He served in the occupation forces in Japan after World War II for 14 months as a military policeman and cook. He returned home from the Army and attended Midlands College for one year where he studied business administration. Walter married his high school sweetheart Delilah Mae Buchholz on October 16, 1949 in West Point where they lived for 35 years before moving to O’Neill, NE. They raised three children Connie, Ronald, and John, and an infant son Donald died shortly after birth. Walter worked in the rural electric business for over 40 years, starting out climbing poles as a lineman, and finishing his career as the Manager of the Niobrara Valley Electric Membership Corporation in O’Neill. Walter was an avid outdoorsman who loved to hunt and fish, and he taught his children to do the same. He also trapped fur bearing animals, such as mink, muskrats, and beavers for many years in the West Point area. He enjoyed family gatherings and vacations, and was able to travel around the country with Delilah as part of his manager position with REA later in his career. Walter was a good provider for his family materially and spiritually, and he helped all three of his children to a college education. He was a generous giver of his time, energy, talents, and finances to those he knew and loved. We will remember him for his love of family, his faith, his laughter, love of nature, and generosity. He will be greatly missed by all who knew and loved him, and we praise the Lord Jesus for his life among us. Walter is survived by sons Ronald (Barbara) of Lincoln, John (Pam) of Omaha; daughter Connie Engelbart of Elkhorn; grandchildren Aaron Engelbart and Leah Mendel, Paul Schmidt, Sarah Navratil, Rachel Schmidt, Theresa Schmidt, Laura Schmidt and Anna Mae Schmidt; great-grandchildren Avery Mae Schmidt, Calvin Schmidt, Elise Mendel, Elliana Navratil, and Alila Mendel. He is preceded in death by his wife, Delilah, in November of 2014, his parents, infant son Donald in May of 1954, and son-in-law Joel Engelbart. Visit Walter and Delilah’s living obituary at www.forevermissed.com/delilah-schmidt