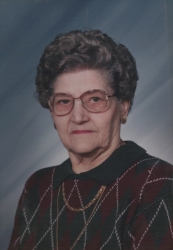 Theresa Agnes Steffensmeier was born December 16, 1921 on the home place near Olean to Bernard and Julia (Renner) Steffensmeier. She grew up there and attended Sacred Heart Academy through eighth grade. Theresa worked as a nanny for area families in addition to helping with the farm. On June 9, 1949, Theresa married Leonard Dinslage at Sacred Heart Catholic Church, Olean. The couple farmed on the Dinslage family farm near Aloys where Theresa raised chickens, ducks, and milked cows. After Leonard’s death in 1982, she moved to town and worked at St. Francis Memorial Hospital in housekeeping for 25 years.

Theresa was a member of St. Mary’s Catholic Church and Christian Mothers. Theresa loved her flower and vegetable garden. She was also known for her delicious horn rolls and her embroidery.